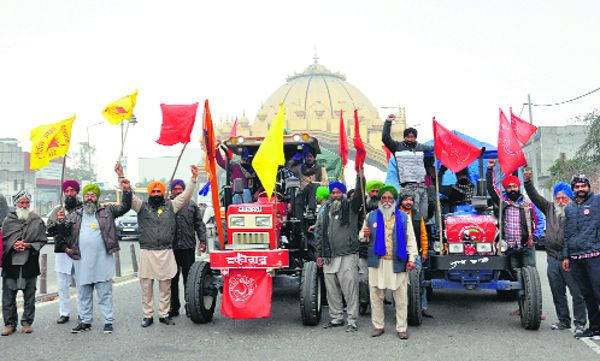 United we stand Farmers leave for Delhi to participate in the January 26 tractor parade from Golden Gate in Amritsar on Saturday. Photo: Sunil kumar

A large cavalcade of tractor-trailers, buses and cars left for Delhi from the Golden Gate here on Saturday to participate in the January 26 tractor parade being organised by farmers’ associations to oppose the controversial agriculture laws.

Farmers from many villages also joined the cavalcade at different points on the GT Road till Beas. Before initiating the march from here, farmers paid tributes to Netaji Subhas Chandra Bose on his birth anniversary.

Speaking on the occasion, many leaders said the government is trying to end the agitation by using unfair means. They also reiterated their resolve to remain peaceful and said the government, instead of using malpractices to end the protest, must listen to farmers and repeal the controversial laws.

The leaders also hailed the sacrifice of Subhas Chandra Bose. Joining in the protest, Prof AS Sidhu (retd) spoke on the life, struggle and sacrifice of Netaji. He said Bose sacrificed his life while fighting against the communal forces of the country.

He said the farmers of the country were not less than freedom fighters and they are fighting to save country from the slavery of the corporate houses.

“Netaji’s ideology is even more relevant during the current times, as the government is hell-bent upon destroying the social fabric in society by bringing various black laws in the country,” he said.

Leaders including Rattan Singh Randhawa, Parkash Singh, Baldev Singh, Balwinder Singh and Harieet Singh also addressed farmers. “Given the choice, nobody wants an 18-hour long tedious and back-breaking journey. If farmers are responding to the call, it means they are agitated. We are agitated, but we are not aggressive or violent,” said Rattan Singh Randhawa. They said after reaching Delhi they would pitch their tents, get a good night’s sleep and be ready for the tractor parade on January 26.