Another suspect was brought on production warrant 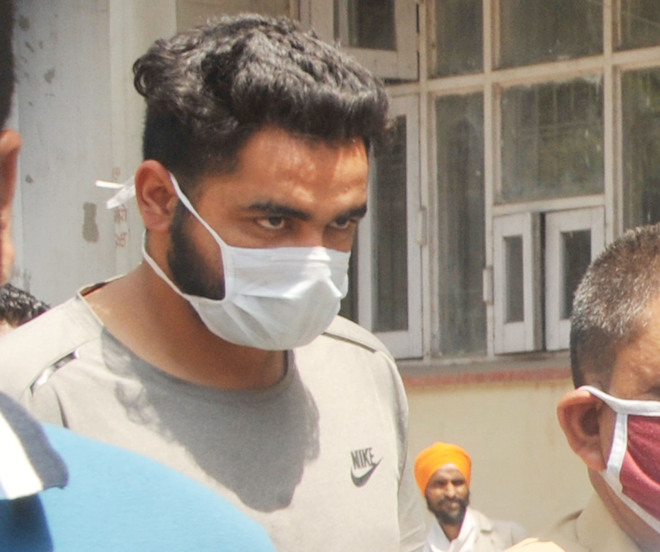 Jagjit Singh,who was arrested with 48 automatic pistols, being produced in the court in Amritsar on Friday.

The local court on Friday extended the police remand of alleged weapon smuggler Jagjit Singh. Jagjit was nabbed by the State Special Operation Cell (SSOC) with 48 automatic foreign weapons believed to be smuggled from Pakistan a week ago.

Following investigation carried out so far, the SSOC produced Pargat Singh, aka Mandeep Singh, a resident of Dhilwan, who was arrested from Amritsar Central jail before a court. Pargat was held by the Batala police in 2019 in connection with the murder of Akali leader Dalbir Singh Dhilwan. Pargat, along with his father Balwinder and brother Major Singh, had shot Dhilwan dead over an old enmity in November 2019.

Pargat allegedly established links with prime suspect Darmanjot Singh, alias Darman Kahlon, having a link with the banned terrorist organisations Babbar Khalsa International and Khalistan Liberation Force based in Pakistan and having operatives in the US, the UK and Canada.

Nevertheless, the police were yet to arrest the “first courier”, who handed over the weapon consignment to him. According to the police, his arrest would clear further links, besides ascertaining the route through which the weapons were smuggled into Indian territory.

The weapons were smuggled from the Pakistan side for carrying out terrorist activities in Punjab. Sources said the police had been analysing the CCTV cameras and other technical inputs to track the “first courier” who had escaped from the spot just a couple of minutes before the police arrested Jagjit Singh.

The prime suspect Darman, a gangster, had migrated to the US several years ago. He was involved in arranging funds from different sources to fuel militant activities, besides facilitating youths’ (with no previous criminal record) joining the banned Khalistani organisation.

The confiscation of a huge quantity of automatic weapons has left many security and intelligence agencies in a tizzy. They were trying to ascertain how the consignment got sneaked into India. Representatives of different agencies have also been interrogating Jagjit Singh.

Moreover, the Amritsar Central Jail had confiscated a mobile phone from Pargat Singh during a search operation on Thursday. The SSOC would also take his mobile into custody for forensic analysis for finding his links with Darmanjot.