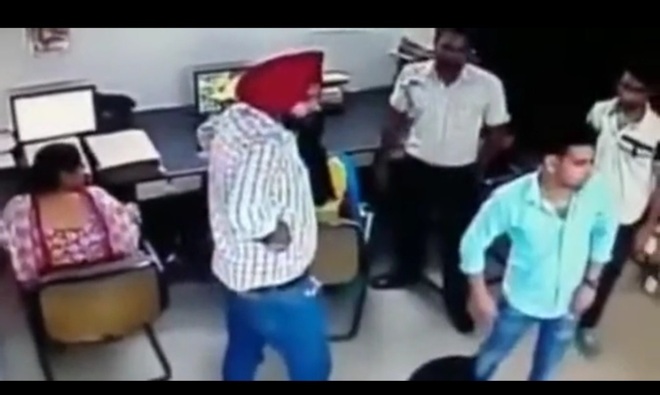 A grab of the video that has gone viral on social media.

Surfacing of two videos on social media showing two persons calling the shots at the Regional Transport Authority (RTA) office and one of them beating up a woman have once again raised a question mark on the working of the RTO.

The viral videos have sent shock waves among people who fear how unscrupulous people and muscle men have their say in the internal working of a government office and how such actions would lead to erosion of fear and respect for government departments.

Regular working of the office has also come under scanner as both unscrupulous persons were seen sitting in the chair of officials and discharging the job. One of them was seen dragging a woman out of the chair and mercilessly beating her up while people rush to disengage him.

One of them was seen sitting on one of the chairs at the RTA office and handling documents like a regular employee and using abusive language against a DTO and a retired employee.

Sources in the RTA said both persons in the video are said to be agents and those women working in the office seemed employees of a private company, which was engaged by the government to install chips embedded in high security number plates.

They said the face of the woman being attacked by the person was not visible properly. They said agents familiar with the internal working of the department and its employees do not give due respect to contractual and outsourced employees. In the video, they are seen raising their voice, calling out the employees’ names publicly and threatening them to get the work done. Not only this, they were also seen using expletives and slanderous tone against one DTO, who had discharged duty at the local office from 2016 and 2017 and another official who had retired three years ago.

It may be recalled here that Amritpal Singh, a clerk at the District Transport Office, was arrested along with six others by the police in connection with the theft of luxury vehicles and their subsequent sale after forging documents in 2014. The tainted clerk used to forge documents of stolen vehicles.

When contacted, RTO Jyoti Bala confirmed that the video was shot at the local office but it seemed to have been shot before 2017 as the culprit is addressing the head as DTO and its nomenclature was changed to the RTA in 2017, she said. She said officials of the department did not recognise both agents, said to be brothers working inside the office.

She said track in-charge Gurdev Singh, who joined in 2018, has been assigned to carry out the preliminary investigation. She said at present only one woman, who is an employee of a private firm, was working with the RTA. The video shows two women officials, which used to be the case years ago.

“I am writing to the Police Commissioner to conduct a probe into the viral video showing two agents exceeding their limit by using non-parliamentary language against the then DTO and another official, sitting on official chairs and assaulting a woman,” she said.