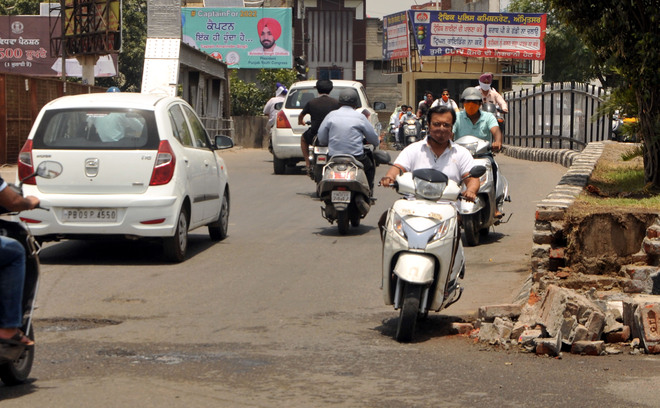 Barricades have been installed at the petrol pump corner to restrict the wrong-side entry near the Bhandari Bridge, but to no avail. Vishal Kumar

The traffic police have failed to rein in the vehicles on the wrong side of entry point on the Bhandari Bridge which leads to inconvenience and minor accidents as it is one of the most crowded stretches of the city.

The traffic police used to divert the commuters from the Kachari Chowk and railway Station towards the Crystal Chowk and direct entry was also not allowed. Barricades have been installed at the petrol pump corner to restrict the wrong-side entry near the Bhandari Bridge.

There is a space between the barricades for scooters and motorcycles. Many two-wheelers, taking advantage of this, enter through the wrong side on the Bhandari Bridge, hence causing traffic snarls. The cops on duty claimed that this relaxation is being provided to avoid traffic congestion at Crystal Chowk. However, some of the residents claimed that the wrong side entry on Bhandari Bridge can prove fatal for the commuters.

Advocate Kuljit Singh, a visitor said, “Sometimes, the four wheelers also take the wrong route in the absence of police. Earlier, it was closed for commuters but with the intervention of some local politicians, it has been relaxed for two wheelers. The traffic police should follow the rules instead of instructions of politicians.”

Gopala Dhawan, a traffic expert said, “The relaxation to two wheeler riders does not serve any purpose as jams are still a routine affair at the Crystal Chowk. Fortunately, the construction of the bridge alongside the Bhandari Bridge ensures that the traffic moves slowly, otherwise it would be fatal for commuters to go on the wrong side. In the absence of cops, even the four wheelers also violate the restrictions especially in the early morning and late evening hours.”

Gurmeet Singh, ACP, said, “There is no such relaxation by the police. We also issue the challans. But sometimes, when the Crystal Chowk gets choked we have to make some alternative arrangements. We are here for the convenience of the public. The construction of a new bridge is under way; the issue would be sorted out soon.