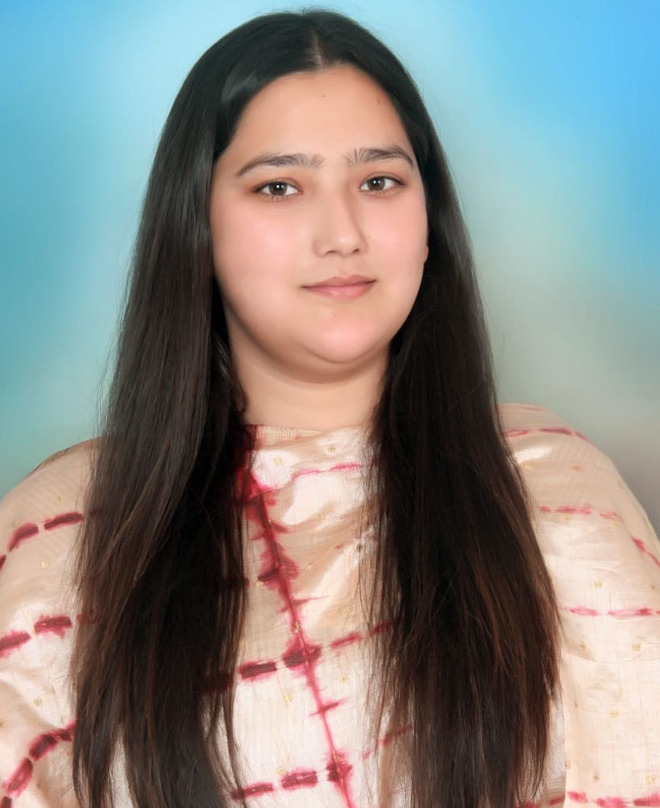 Pallavi Thakur (pic), the youngest woman to be elected as a sarpanch in Punjab, has taken it upon herself to stem the tide of Covid in and around her native village of Hara falling in Sujanpur assembly seat. She is the same woman who made headlines when she received a call from PM Narendra Modi in April last year on the occasion of the National Panchayati Raj Diwas. The ‘youngest woman sarpanch’ tag is official as it has been given to her by none other than the Punjab Government on January 13, 2019, at a function organised in Gurdaspur. Thakur has already made a name for herself while working in the field of health, education, women empowerment and identifying sources of fresh water in the underdeveloped and underprivileged Dhar block. Underprivileged, because when it comes to developmental initiatives, officials for some inexplicable reason, look the other side. In February this year, Thakur was felicitated by Chief Minister Capt Amarinder Singh for working tirelessly on the concept of ‘Har ghar paani, har ghar safai.’ Not the one to rest on her laurels, Pallavi has now joined hands with sarpanches of adjoining villages to fight the scourge of the virus. “Our challenges are immense. Across the globe, the spread of Covid-19 continues to cause disease, death and disruption. It has pushed even the most advanced health systems to the brink. There should be no illusions at all whatever be a country’s transmission rate. We should sit together and formulate short, medium and long-term strategies. The three things that need to be done immediately are: control and suppress the spread of the virus, strengthen and maintain health services and support each other to stay safe, healthy and well,” she quipped. These days this village head is busy educating people of her area, particularly the womenfolk, about the benefits of getting vaccinated. “I tell people that it will be the vaccine in the ultimate analysis that will help us shun the masks. It will also help them reconnect with family and friends,” she says. Thakur displays a lot of maturity when she says, “You educate a man, you educate a man. You educate a woman, you educate a generation. It is a man’s world out there and our women have to be strong. Whenever you see a successful woman, look out for three men who are going out of their way to block her,” she said. That is some food for thought !

This Congman is ready to take on Babbu challenge

Political analysts claim the Sujanpur assembly seat is a BJP stronghold just because of one reason. That is the social connect enjoyed by three-time sitting legislator and former deputy Speaker Dinesh Singh Babbu. He gets up early in the morning and manages to meet half a dozen sarpanches before he comes back home for lunch. The afternoons are spent discussing ways and means with administration officials to usher in developmental works in what arguably is one of Punjab’s most backward assembly seats. It is not for nothing that even dyed-in-the-wool Congressmen fear to tread into Babbu’s area of jurisdiction. With nobody willing to take him on, some youngsters have come onto the scene to challenge his might. One such youngster is Bhanu Partap Singh (pic), Indian Youth Congress’s media cell in-charge for Punjab. He has been appointed as the chairman of the Pathankot Market Committee. This is a coveted post for any youngster aspiring to make it big in the political firmament because it provides him a good platform to display his political skills. The ceremony to appoint Bhanu Partap, a known loyalist of PPCC Chief Sunil Jakhar, was held on Thursday in Pathankot. Among others, it was attended by Cabinet minister Bharat Bhushan Ashu, MLA Amit Vij and other prominent Congressmen. Observers say the next “politically logical” step for Bhanu is to try and get the party ticket. “Age is on his side. The scramble for the party nominations has already begun and Bhanu is surely one of the contenders. A big factor that goes in his favour is that he is a Rajput and a majority of voters in Sujanpur belong to this community,” said a MLA. What remains in the realms of speculation is whether Jakhar will give his blessings to the youngster when it comes to separating the contenders from the pretenders.

After a long and agonising wait, the Pathankot Municipal Corporation had a Mayor. Pathankot is a Hindu dominated assembly seat and caste based politics surfaces more often than not. MLA Amit Vij was faced with the daunting choice of “appointing the right man with the right credentials with the right caste.” He had to walk the political tightrope with the finesse of a trapeze artist. Finally, after numerous meetings, a majority of them which were held clandestinely, the name of Panna Lal Bhatia (pic), a five-time councillor, emerged as the leading contender. The legislator’s choice of appointing a four-time councillor Vikram Mahajan to the post of senior deputy mayor, too, has gone down well with the party rank and file. And by adjusting Ajay Kumar, an SC, as the deputy mayor, Vij had played his aces to near perfection. With elections staring at him within eight months, the MLA needed to play his moves on the political chess board with utmost care and caution. And, guided by his brother Ashish Vij, that is what he has done.