RAJOURI: Senior Superintendent of Police, Traffic (Rural Jammu), vide an office order issued on Tuesday, has ordered an enquiry after some miscreants changed the word ‘driving’ to ‘drinking’ on a signboard installed by the department at Pir-Ki-Gali on Mughal Road. 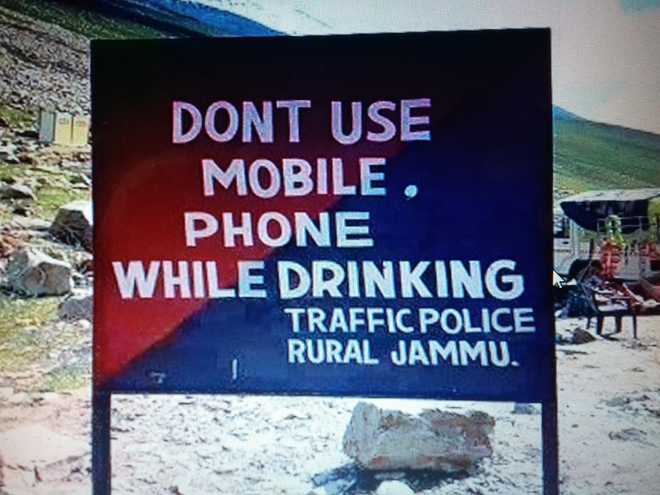 The signboard installed at the Mughal road in Jammu. Tribune photo

Senior Superintendent of Police, Traffic (Rural Jammu), vide an office order issued on Tuesday, has ordered an enquiry after some miscreants changed the word ‘driving’ to ‘drinking’ on a signboard installed by the department at Pir-Ki-Gali on Mughal Road.

The SSP, in his enquiry order, said some miscreants might have changed the word ‘driving’ with ‘drinking’ on the signboard, which was a matter of serious concern.

“In order to identify and fix the responsibility of defaulters, a preliminary enquiry is hereby ordered with immediate effect”, reads the order issued by SSP Mohan Lal Kaith. Mohd Rafiq, DSP (Traffic), Rajouri-Poonch range, has been asked to conduct the enquiry and furnish his report /recommendations to his office for further course of action.