‘I don’t care for titles or ranking, I want to just play on’

NEW YORK:An emotional Rafael Nadal says extending his years as a competitive player in tennis means more to him than overtaking Roger Federer&rsquo;s all-time Grand Slam record or chasing after the world No. 1 rankings. 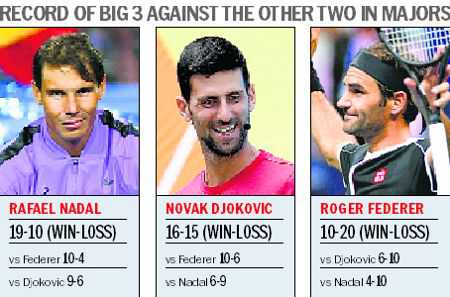 An emotional Rafael Nadal says extending his years as a competitive player in tennis means more to him than overtaking Roger Federer’s all-time Grand Slam record or chasing after the world No. 1 rankings.

“Just very happy. This trophy means everything to me today,” said Nadal, who was moved to tears by a video tribute after the match. “The last three hours of the match have been very intense, very tough mentally and physically, too. With the video, the crowd that have been as always amazing, all these facts make the moment super special. Unforgettable moment,” he added.

The dramatic victory pulled him within one Slam title of matching Federer’s all-time men’s record with top-ranked Novak Djokovic a close third on 16. But second-ranked Nadal stressed he’s more concerned with extending his career as long and as well as possible than he is setting a Major win record.

“I would love to be the one who wins more, but I am not thinking and I’m not going to practise every day or playing tennis for it,” Nadal said. “I’m playing tennis because I love to play tennis. I can’t just think about Grand Slams. Tennis is more than Grand Slams. I need to think about the rest of the things. I play to be happy. Of course, the victory makes me super happy,” he added.

Personal satisfaction such as what Nadal derived from holding off stubborn Medvedev in his epic fightback drives Nadal far more than comparing Slam trophy cases. “That competition, if that attracts fans and create interest on the people, that’s good for our sport, no? I feel honoured to be part of this battle,” Nadal said. “But I repeat the same: you can’t be all day looking next to you about if one having more or one having little bit less because you will be frustrated. All the things that I achieved in my career are much more than what I ever thought and what I ever dream. I would love to be the one who has more, yes. But I really believe that I will not be happier or less happy if that happens or not happen. What gives you the happiness is the personal satisfaction that you gave your best. In that way I am very, very calm, very pleased with myself.”

No.1 no big Nadal deal

Overtaking Djokovic for the year-end world No. 1 ranking isn’t high on Nadal’s list of goals, saying it could detract from longevity and quality. “I don’t compete for it. I just do my way. If I am able to be No. 1 doing my way, great. But I always say the same: today it’s not my main goal,” Nadal said. “It’s great to be in that fight. But for me personally, is not really a fight. I just try to be competitive the weeks I want to compete.”

“With my age and with my goals, I cannot lose energy or time to follow the No. 1. I need to think about my career in a different way,” he added. “For me, my main goal is play as long as possible and being competitive. Sometimes if you need to follow the number one, you going to lose years of your career. But I am there. If I am able to play well until the end of the season, I going to have my chances. That’s going to be amazing,” he signed off. — AFP