SYDNEY:Compulsory neck guards on helmets for Australian cricketers are “not far away”, the national team’s medical chief said after a sickening blow felled Steve Smith during the second Ashes Test. 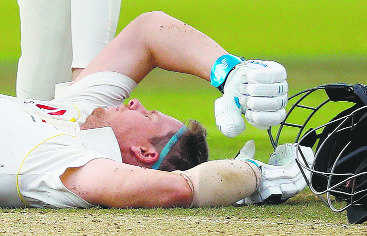 Steve Smith said after the incident that neck guards made him claustrophobic and uncomfortable. file

Compulsory neck guards on helmets for Australian cricketers are “not far away”, the national team’s medical chief said after a sickening blow felled Steve Smith during the second Ashes Test. Australia have been at the forefront of pressing for better safety measures after the death of Phillip Hughes, who was hit on the base of the skull by a bouncer in a Sheffield Shield game in 2014. Following an independent investigation into the tragedy, Cricket Australia introduced new rules for concussion substitutes in domestic games. These have now been adopted by the International Cricket Council and were used for the first time when Smith was replaced by Marnus Labuschagne on Sunday against England at Lord’s after medics ruled him unfit to carry on.

The inquest into Hughes’ death also recommended First-Class players in Australia wear helmets made to British safety standards while batting against medium pace or fast bowling. That included the use of specially designed neck guards, known as StemGuards. But they are not compulsory and Smith, who collapsed to the ground face first after the vicious ball from Jofra Archer smacked into the side of his neck, in scenes reminiscent of the Hughes incident, was not wearing one. He said afterwards they made him claustrophobic and uncomfortable.

Cricket Australia’s sports science and sports medicine chief Alex Kountouris said it was only a matter of time before they became mandatory, revealing the ICC, CA, ECB, and helmet manufacturers recently completed a major review.

“Helmet manufacturers did the right thing and came out with products (after Hughes’ death). There was no real knowledge of the mechanism, what exactly they were trying to protect or stuff like that,” Kountouris said. “But since that time we have done a lot of research. We actually have a pretty good understanding of that now. Now there was agreement on what the standard should look like, including the size and area that needs to be covered and the force properties it should have,” he added.

Kountouris said it would take about six months for manufacturers to complete the upgraded product, which then would be trialled by players.

London: The Marylebone Cricket Club, in a one of its kind penalty, ejected one of its members after he sledged Smith in the famed Long Room of the pavilion during the second Ashes Test which ended in a tense draw. The incident occurred on Saturday when Smith was walking from the field after he got out scoring 92 in the first innings. The unidentified member called the former Australian skipper a “cheat and a disgrace” as he made his way back to the dressing room.

England have named an unchanged 12-man squad for the third Ashes Test starting on Thursday, with recovering seamer James Anderson set to play for Lancashire’s second XI to step up his rehabilitation.  Anderson, who is recuperating from a right calf injury, will feature against Leicestershire in a three-day friendly match starting Tuesday. — Agencies

Melbourne: Cricket Australia has defended the team doctor who allowed Steve Smith to resume his innings after assessing him for concussion on Day 4 of the second Ashes Test and then ruled the veteran batsman out the following day after further testing. Alex Kountouris, Cricket Australia’s manager of sports medicine, told a news conference in Australia on Monday he was “100%” satisfied with team doctor Richard Saw’s treatment of Smith in London on the weekend, and he urged against any over-reaction to the sport’s new concussion guidelines. — AP

Dubai: Australian batsman Steve Smith pipped New Zealand skipper Kane Williamson to second spot with only nine points separating him and the top-ranked Virat Kohli in the latest list for ICC Test list. The Indian captain, with 922 points, is on top of the list while Smith, after his twin Ashes hundreds in Birmingham and 92 at Lord’s, is on 913 points. The other Indian in the top-10 is Cheteshwar Pujara, who stayed put at his fourth position. Sri Lanka captain Dimuth Karunaratne made rapid strides, entering the top-10 at eighth with a jump of four ranking places. In the bowlers’ list, Pat Cummins remained firmly entrenched on top of the table while Ravindra Jadeja improved from sixth place to fifth. His spin bowling partner Ravichandran Ashwin remained 10th. — PTI