JAMMU: Whenever anybody talks of the Army’s bravery during the Kargil war and defeating the enemy sitting on advantageous position, a picture of soldiers standing tall on Tiger Hill with the national flag flying high comes in front of the eyes. 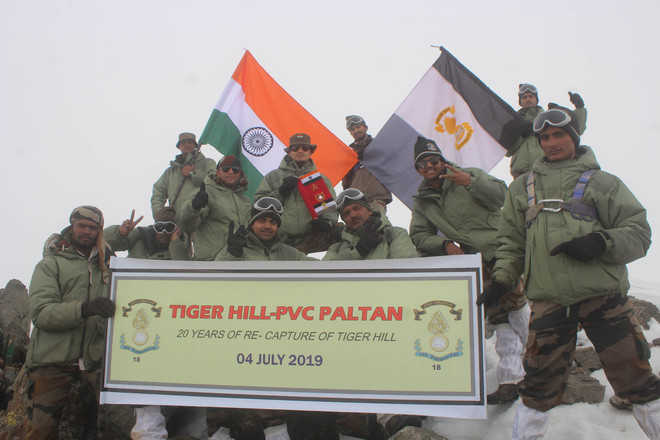 Whenever anybody talks of the Army’s bravery during the Kargil war and defeating the enemy sitting on advantageous position, a picture of soldiers standing tall on Tiger Hill with the national flag flying high comes in front of the eyes.

That picture was widely circulated in the media, be it newspapers or electronic media, and became synonymous with the valour of the Army.

But not many people know who were those men in olive green and which battalion did they represent. It was the 18 Grenadiers unit, which is now commonly known as the Param Vir Chakra (PVC) battalion as one of its soldier, then Sepoy Yoginder Singh Yadav (now Subedar Major) was awarded the PVC by the government for his bravery.

Subedar Major Yadav was the only survivor among the seven soldiers who had managed to launch an offensive against the enemy on Tiger Hill on the morning of July 4, 1999. Despite receiving 15 bullets and splinter injuries, he rolled down to provide crucial information about an impending offensive by the enemy, which ultimately proved beneficial for the capture of Tiger Hill.

Now, as the nation is in a celebratory mood, the 18 Grenadiers unit is also taking pride in celebrating the 20 years of the Kargil war.

Several programmes were organised by the unit and many other events are being organised to celebrate the victory.

To relive the victory moment, the 18 Grenadiers this time organised an expedition to Tiger Hill and get a feel of how their colleagues had done it for the country.

“In May, I told my jawans that we are going to organise an expedition to Tiger Hill to celebrate the 20 years of the war and asked them who wanted to join. All 300 men of the battalion were in front of me and wanted to become a part of the expedition. It was difficult to select 15 of them but it spoke of the motivation of our soldiers,” said Col RK Singh, Commanding Officer of the 18 Grenadiers.

At present, the 18 Grenadiers is based in the Lalgarh area of Sri Ganganagar district of Rajasthan.

The unit completed the expedition and the most memorable moment was when the soldiers of the unit posed for the picture on the same spot on Tiger Hill in the same manner like it was done 20 years ago.

“On July 4, 1999, the soldiers of our battalion had managed to capture Tiger Hill and it became our battle honour day. This year on July 4, our expedition team reached the top of the Tiger Hill and tried to relive the moment,” Colonel RK Singh said. On July 26, the 18 Grenadiers will organise a motorcycle rally and 20 soldiers of the unit will visit various areas to meet veer naris.

The unit has preserved every memory of the war and the Vijay Jyoti hall in the unit reflects whatever the soldiers did 20 years ago. The hall has a museum where all documents have been digitised to preserve the memory and replica of Tiger Hill to motivate the soldiers of the unit.

The unit is also famous among the Grenadiers and best of the soldiers want to become part of it.

“For the last six years, we don’t have any representative in the Grenadiers centre at Jabalpur but we still get good quality soldiers. They join because of our name and fame and they know what the 18 Grenadiers is all about,” the Commanding Officer said.

Moreover, after 20 years, the regimental song of the Grenadiers was changed and the word, Kargil, was included into it.