JALANDHAR: Cracking down heavily on illegal colonies and encroachments in the district, the Jalandhar Development Authority (JDA) today demolished 19 illegal buildings near Lovely Professional University on the outskirts of the city. 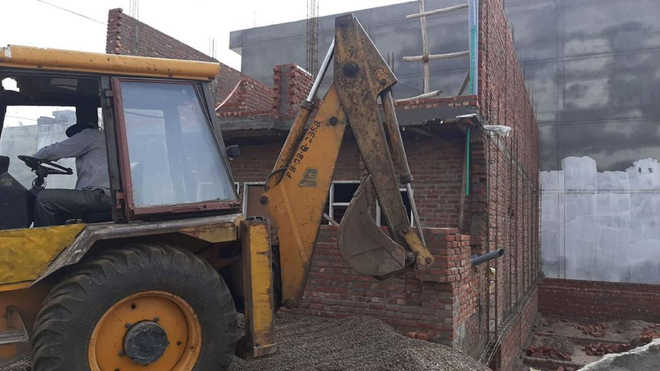 The demolition drive in progress on the outskirts of Jalandhar city. Tribune photo: Malkiat Singh

Cracking down heavily on illegal colonies and encroachments in the district, the Jalandhar Development Authority (JDA) today demolished 19 illegal buildings near Lovely Professional University on the outskirts of the city.

On the directions of Chief Administrator of the JDA Jitendra Jorwal, a special team of the civic body razed the illegal buildings in Chehru and Mehru and other villages. The JDA team demolished these buildings after duly giving notice to them for major violations of the norms. Heavy police force was also deployed on the occasion.

The Chief Administrator said mushrooming of illegal buildings would not be allowed in the district.

Jorwal said as per the directions of the state government, the JDA would take strict action against any such colony or building coming up in its jurisdiction.

The Chief Administrator said the JDA had already set up a special regulatory authority to take stringent action against violators of law on the one hand and strengthening its regulatory wing on the other.

He said a centralised complaint cell had been set up to register and maintain all complaints received over telephone or in writing.

Jorwal said to ensure that this regulatory body works efficaciously, various officers of the civic body have been assigned specific subdivisions.

“We will soon get an FIR registered against violators for flouting the norms,” he added.

Chief Administrator of the JDA Jitendra Jorwal mushrooming of illegal buildings would not be allowed in the district. As per the directions of the state government, the JDA would take strict action against such violators.