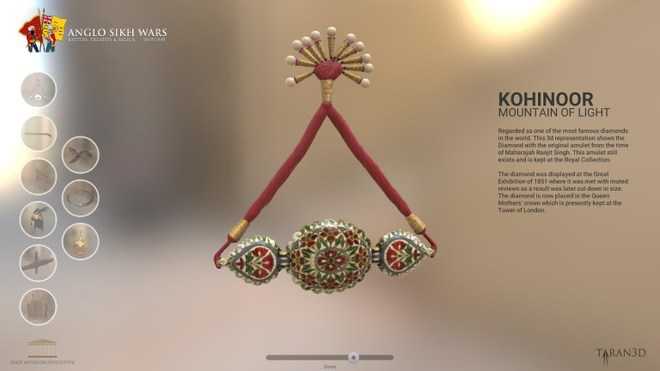 Bringing back to life: Kohinoor from 1851 and a gold tikka belonging to Maharani Jindan Kaur and by descent to Princess Sophia Duleep Singh. Photo courtesy: www.anglosikhmuseum.com

The museum allows visitors to see objects in 3D and by 2020 it aims to be a fully interactive 3D Sikh online museum, Gurinder Singh Mann, historian and director of the Sikh Museum

initiative, said in an emailed communiqué.

The Anglo-Sikh Virtual Museum can be seen at www.anglosikhmuseum.com and is funded by The National Lottery Heritage Fund and supported by many museums across the United Kingdom.

The project was launched on August 8, the birthday of the Princess Sophia Duleep Singh, the granddaughter Of Maharaja Ranjit Singh and the daughter of Maharaja Duleep Singh.

Among the people who came to the event from across the UK included councilors and members of the armed forces.

A panel discussion on the importance of using technology and preserving Sikh history and heritage was conducted with Dr Opinderjit Kaur Takhar, Director of the Centre for Sikh and Punjabi Studies, Susan Stronge, Senior Curator at the Victoria and Albert Museum and Gurinder Singh Mann.

“It was noted that the Anglo-Sikh history was missing from the school curriculum and projects like this could lead the way to resolve this,” Mann said.

Virtual Reality and 3D technology certainly have a large role to play in engaging those in society that may not otherwise visit museums. Furthermore, it can certainly play a critical role in preserving artefacts that are too fragile or indeed recreating those that may have been lost.