ANANTNAG:Four militants of Ansar Ghazwat-ul-Hind, believed to be an Al-Qaida affiliate, were today killed in a gunfight with security forces in Shopian district, 60 km from Srinagar. 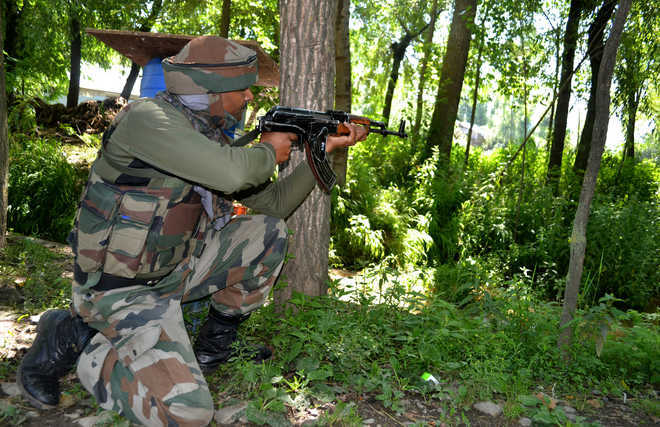 Four militants of Ansar Ghazwat-ul-Hind, believed to be an Al-Qaida affiliate, were today killed in a gunfight.

Four militants of Ansar Ghazwat-ul-Hind, believed to be an Al-Qaida affiliate, were today killed in a gunfight with security forces in Shopian district, 60 km from Srinagar.

They were identified as Showkat Ahmad of Rajpora and Azad Ahmad Khanday alias Maulvi of Bamnoo, both in Pulwama, and Suhail Yousuf and Rafee Hassan Mir of Kellar in Shopian.

“They were led by Showkat and were influenced by the Islamic State (IS),” Director General of Police Dilbag Singh said. Suhail and Rafee, said sources, had joined the organisation after the death of chief Zakir Musa last month.

“A Hizb member earlier, Showkat was active since 2015 and was instrumental in the recruitment of the other three militants killed today,” the sources added.

The gunfight started in Daramdur area of Keegam in Shopian around 6.15 am. A senior police official said an operation was launched following a tip-off.

“As we began to cordon the area, the militants, holed up inside an orchard, opened fire.” The exchange of fire, amid lashing rain, continued for more than two hours till the four militants were gunned down.

The bodies were handed over to the families after medico-legal formalities. Hundreds of mourners attended the funeral prayers for the slain militants.

Bijapur: A policeman was killed by Naxals at a weekly market in Chhattisgarh’s Bijapur district on Sunday. Assistant constable Chaitu Kadti was with his family when he was suddenly stabbed. PTI