LUDHIANA: With 53 new patients confirmed positive for dengue today, the count of dengue patients from Ludhiana has gone above the 500 mark. 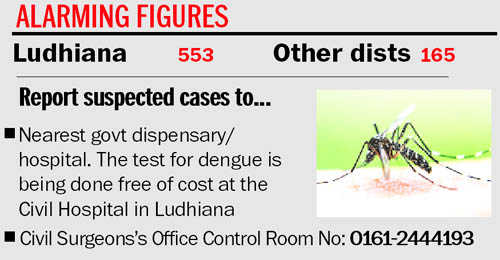 The Health Department has urged all government departments to make collective efforts to keep a tab on the spread of dengue.

District epidemiologist Dr Ramesh said: “We have been instructing people not to let water get stagnant near their homes. Cleanliness is the only key to ward off dengue.”

The Health Department has also directed schools heads to educate students about ways to prevent dengue fever during their morning assemblies.

He said parents should make their children wear full sleeve shirts before going to school or else apply mosquito repellant creams on their arms and other body parts.

In addition to this, the Education Department has been asked to organise special awareness campaigns in schools during the morning assembly and Water Supply and Sewerage Board officials have been directed to check water accumulation in all areas of the district and make sure that the areas are cleaned.

Rural Development Department, Nehru Yuva Kendra and other such departments have been asked to organise periodic meetings and awareness campaigns in different parts of rural and urban areas, especially slum areas.