A garden hanging on in time

A casual drive on Delhi roads will make you catch a glimpse of the many tombs, serais, baolis and monuments that the Capital boasts of. 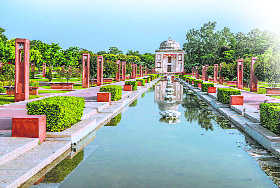 Amidst nature: Sunder Burj looks resplendent in its restored form

A casual drive on Delhi roads will make you catch a glimpse of the many tombs, serais, baolis and monuments that the Capital boasts of. One such gem is the16th century 90-acre heritage garden project — the Sunder Nursery.

Once upon a time, the garden was home to 15 monuments, including tombs, green pavilions, wells and even a 16th-century lotus pond. It recently opened to public after a decade-long landscape and heritage conservation project was wrapped up. The Aga Khan Trust for Culture (AKTC) in collaboration with the Archeological Survey of India (ASI) and the Central Public Works Department (CPWD) took up the responsibility to give a facelift to Delhi’s much-valued green cover.

TheNursery was built by the British in the early 20th century with an aim to curate a place where plants brought from other parts of the Colonial empire could be sown and experimented upon. The park boasts of the Capital’s first arboretum with almost 300 tree species, drawing 80 species of birds and 60 of butterflies.

In the rear view

Intricate plasterwork, a band of inscriptions and exquisite geometric star patterns on the domed ceiling reserve Sunder Burj’s much-coveted   place in history. Landscaping is in tandem with the Mughal architecture. Among an ensemble of garden tombs, past the amphitheatre, lies the Sunderwala Mahal, a 16th-century tomb surrounded by the gardens.

“The masterplan of the landscaping has been designed by late Prof M Shaheer, a landscape architect, who derived inspiration from the traditional Indian concept of congruency among nature, garden and utility,” informs Archana Saad Akhtar, senior programme officer design and outreach, AKTC. The park rolls out with a 500m grand Central Vista. Monolithic marble fountains and flowing water, geometric flower beds and raised sandstone pathways are the defining features of the contemporary interpretation of the Persian and Mughal architecture. The style gives importance to space division, creating a rich carpet-like spread.

Ratish Nanda, chief executive, Aga Khan Trust for Culture, India, talks about the importance of historic restoration, “We hope that the Sunder Nursery becomes an ecological, heritage and cultural hub of Delhi. Achieving financial sustainability is another objective.”

A craft-based approach was found to be the most appropriate in the Indian context. Experienced craftsmen, adept in the traditional ways of construction, were involved. Stone-carvers, masons, tile makers, lime plasterers and other craftsmen clocked 5,00,000 man-days of work to conserve over 45 monuments in the Humayun’s Tomb–Nizamuddin area.

Only lime mortar was used in the project, prepared in the lime wheel installed on the site. The lime mortar uses natural additives like lentils, gur molasses, jute, egg white and gum. In Sunder Burj, conservation work included restoring the missing lattice screens, repairing the roof. Western façade of Sunderwala Mahal was repaired and rebuilt as well.