Pandit Ronu Mazumdar is one of the most popular flautists today, having successfully combined the classical tradition of the Senia Maihar gharana with collaborations with world-famous jazz artistes. 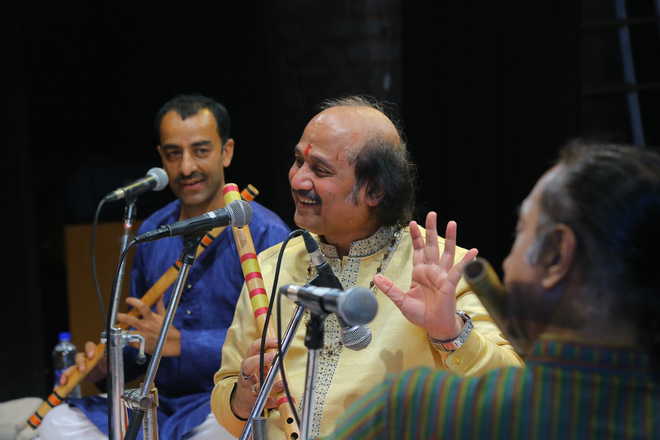 The maestro performs at Gaiety Theatre

Pandit Ronu Mazumdar is one of the most popular flautists today, having successfully combined the classical tradition of the Senia Maihar gharana with collaborations with world-famous jazz artistes. He has also successfully made forays into the world of Bollywood and ghazals. World recognition of his talent came as early as 1996 when he was a young 34 year old, in the form of a joint Grammy nomination for the album Tabula Rasa with Bela Fleck. Acknowledgement of his prowess on the flute came in 2014 with his being awarded the Sangeet Natak Akademi award. One of the best selling records of Hindustani music remains Heart to Heart, his work with Ustad Zakir Hussain in 1996.

What is, however, not generally known about Pt Ronu Mazumdar is his excellence as a teacher. Last week, Shimla’s landmark Gaiety Theatre resounded with the sweet strains of Raag Aiman Kalyan played by four of his disciples — Kalpesh Sachla from Mumbai, Shivalingappa Rajapur from Bangalore, Jabahar Mishra from Bhuvaneshwar and Haridutt Bharadwaj from Shimla. Accompanying them, and later Pt Ronu Mazumdar, on the tabla was Diwakar Sharma from Shimla, of the Banaras gharana.

The occasion was the annual tribute to Shimla’s flautist Pt Chetram Sharma, whose grandson Haridutt organises a musical tribute by his guru Pt Ronu Mazumdar every year. This year, the guru insisted on the inclusion of the four young artists, followed by his own concert. Though the four flautists had never before shared the stage together, they played with a seamless, smooth transition from one to the other; the synergy of their musical thought and expression ample proof of their training.

Chatting after the concert, Pt Mazumdar shared: “Main dhooan ban ke chalaa jaaunga; mere shishyon mein dhoonda karegi duniya mujhe. I believe knowledge acquired always remains with one if it is shared. Knowledge has to be given fully and without payment. Vidya becchi nahi jaati. It also cannot remain just a family preserve. That is what I have learnt from my gurus — my father, his guru Pt Panna Lal Ghosh, Pt Lakshman Prasad Jaipurwale, Pt Vijay Raghav Rao and Pt Ravi Shankar. Today these boys played a traditional gat (composition) of Ustad Allaudin Khan, founder of the Maihar Senia gharana. This is how tradition is passed on.”

Each of these students has now been learning for 10-15 years, Kalpesh being the oldest disciple. “He comes from a traditionally clothes-cutting family from Gujarat with no exposure to classical music. Shivalinga is originally from Gulbarga; there is an equal interest there in North Indian and Carnatic. He has been learning in our style even before he came to me. With Haridutt, my connection is through his grandfather, who I met at the Harivallabh Festival in Jalandhar in 2004. Chetram ji said I am handing over my grandson to you, please teach him. I have taught him what I could. That’s why I have such a connection with Shimla and it’s an honour to come here each year to play in this memorial concert,” says Pt Mazumdar.

He lauds the Department of Language Art and Culture for taking the lead in helping local organisations and artistes like Haridutt organise classical music events. “Last year also I was invited to play at the Trigart festival in Dharamsala. The government also hosts an annual classical music festival. I wish each state in India played such an active role as a patron of the arts.”