JAMMU: Union Minister Jitendra Singh today said that the abrogation of Article 370 was the biggest achievement of the Modi government in the first 100 days of its second term. 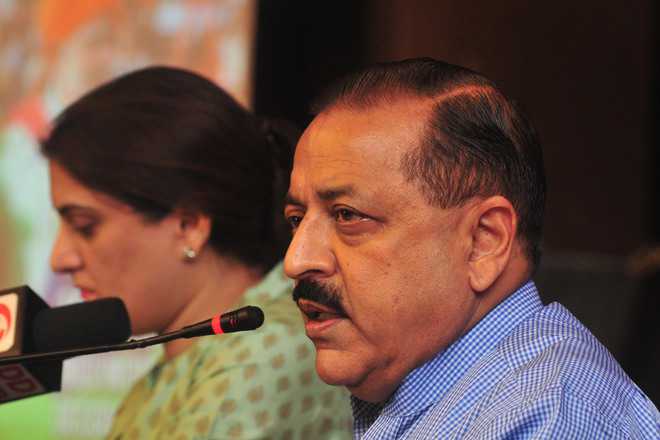 Union Minister Jitendra Singh today said that the abrogation of Article 370 was the biggest achievement of the Modi government in the first 100 days of its second term.

He said the common man on the streets of Kashmir was rejoicing, and he would realise and rejoice more when benefits start arriving.

“It is only a handful of those who were beneficiaries of this mayhem, which carried on for years together and benefited their generations after generations,” said Jitendra Singh, adding that whosoever tended to instigate or provoke anti-India sentiment while living in India would have to answer for that.

“Even for a Kashmiri, he has to be Indian first and Kashmiri next. In no circumstances can there be a precedence given to any other identity over the identity of Mother India,” he said.

He was addressing media in Jammu in connection with 100 days of the Modi government.

Jitendra Singh said residents of Jammu and Kashmir know the importance of the abrogation of Article 370.

The Union Minister further said that the world had accepted the initiative taken by the Modi government about Jammu and Kashmir, with many more countries accepting India’s viewpoint.

Elaborating on Article 370, Singh said it was a temporary provision that lingered on for 75 years and quoted Shyama Prasad Mukherjee’s recorded statement in Parliament over the identity of citizens of India.

He said that it was also an occasion to recall the redemption of an observation made by Shyama Prasad Mukherjee when, in a debate in the Lok Sabha in 1953, Mukherjee had raised serious concern over certain observations made by Sheikh Abdullah at that time.

Over returning of the statehood back to Jammu and Kashmir, Singh said that Home Minister Amit Shah had already given his word on it. “Earlier, the government took 72 years to erase the temporary provision; we will take less than 72 years to restore the statehood.”

Jitendra Singh also said that house arrests in the state would also not take too long a time like 18 months, as agencies were privy to every sequence of events and it should be left to their wisdom.

He added that India’s viewpoint was universally accepted as far terrorism or Pakistan’s role in perpetuating terrorism was concerned. What is being propagated in Islamabad was being taken care by the ministry concerned.

He further said that it was going to be the last phase of terrorism in Kashmir. The minister said the present government was quite abreast of the challenges facing the country and was doing a lot to overcome these.