JALANDHAR: While the ‘Birdh’ and dried-up ‘Sarovar’ is crying for attention of the Pakistan government and authorities, the main building of Gurdwara Bal Leela Sahib in Nankana Sahib in Pakistan has been thrown open for pilgrims and visitors following completion of a 10-year-long renovation and reconstruction process. 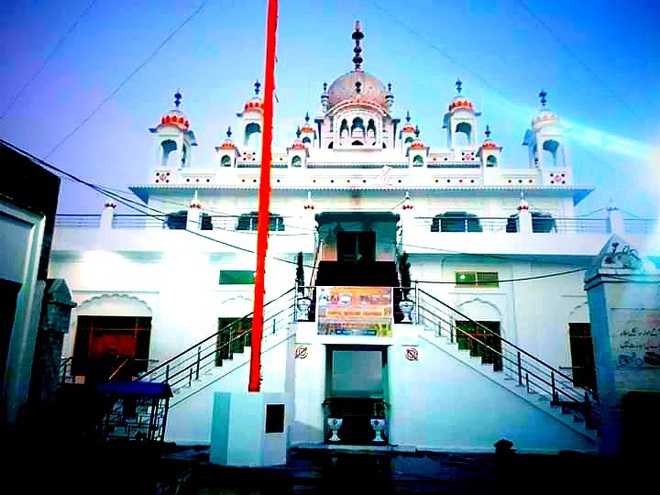 While the ‘Birdh’ and dried-up ‘Sarovar’ is crying for attention of the Pakistan government and authorities, the main building of Gurdwara Bal Leela Sahib in Nankana Sahib in Pakistan has been thrown open for pilgrims and visitors following completion of a 10-year-long renovation and reconstruction process.

Gurdwara Bala Leela Sahib holds great importance. It was the place where Guru Nanak Dev used to play during his childhood in an open field along with his childhood friends. It was where the Guru — who was born in Nankana Sahib (now in Pakistan) on April 15 in 1469 — used to bestow his friends with enlightenment about the Almighty in his infancy.

Gurdwara Bal Leela was situated about 300 meters south-east of world-famed Gurdwara Janam Asthan. The Nanaksar sarovar (holy pond) on the gurdwara premises was originally built by Rai Bular — the ruler of Rai-Bhoe-Ki-Talwandi (presently known as Nankana Sahib after being named after Guru Nanak. The gurdwara management was with the ‘Nirmala Sikhs’ prior to the ‘Saka of 1921’.

Between 1921 and 1947, Panthic forces or Sikhs managed its affairs. After the Partition, the management of this holy shrine had got transferred to the Evacuee Trust Property Board of Pakistan (ETPB).

The dilapidated and unsafe main building of the gurdwara was virtually closed down for visitors about 15 years ago.

“Now, the Gurdwara has once again been opened for pilgrims after the completion of the ‘Kar Sewa’ of the holy place with the joint efforts of the the UK-based ‘Jatha Guru Ka Bagh’, Baba Jagtar Singh ‘Kar Sewa Wale’ of Tarn Taran, the ETPB and the Pakistan Sikh Gurdwara Parbandhak Committee (PSGPC),” said Bhai Sukhbir Singh Maan, head granthi-cum-caretaker of the gurdwara while talking to The Tribune from Nankana Sahib over the phone.

The langar hall, the ‘Parkash Asthan’ and ‘Sukhaasan Sthan’ have been renovated, he said.

The ‘Birdh’ (Old) ‘Sarovar’ situated adjacent to the Gurdwara is still lying dried up and is badly in need of renovation. “The gurdwara is open all times for pilgrims and visitors now,” said Sukhbir Singh Maan.

Guru Hargobind, it was said, had also visited the town and had got the shrine premises enlarged. Similarly, Dewan Kaura Mal—A Hindu noble—had got the holy pond renovated and brick-lined after his victory over Multan in 1748. Maharaja Ranjit Singh was behind renovation of the holy shrine building and enlargement of the ‘Sarovar’ in early 1800.

The last renovation of the gurdwara was said have been held under the supervision of Sant Gurmukh Singh ‘Sewa Wale’ between 1930 and 1940.