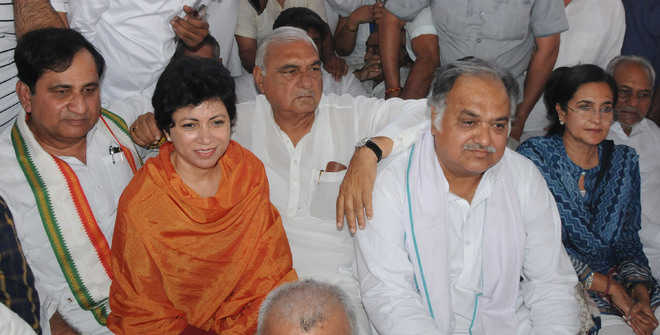 The decision comes after Haryana Pradesh Congress Committee president and Rajya Sabha MP Selja sent a request to this effect to the Speaker. She mentioned that being the single largest Opposition party, the status maybe granted to Hooda who had been unanimously chosen as the Congress Legislative Party leader. The Speaker, in his order, said that the state government be informed of the decision to extend various facilities Hooda was entitled to following the decision.

Ahead of the state Assembly elections, Congress chief Sonia Gandhi has appointed Selja as HPCC chief while Hooda was given the twin responsibility of the CLP chief and the chairman of the state election management committee.

Though being the Leader of Opposition at this stage means practically nothing since the Assembly sessions are over and the state is already gearing up for the October elections, it does expose the bitter infighting within the Congress state unit due to which this status was denied to Congress MLA Kiran Choudhry who remained the CLP leader for nearly the entire term of the present Vidhan Sabha.

In her capacity as CLP leader, she had written to the Speaker to give her the designation of the Leader of Opposition. However, her claim was rejected on the grounds that the state unit chief, Ashok Tanwar in this case, needed to give it in writing that she was the unanimous choice of the legislators. While he dragged his feet, the party top brass also remained silent on the issue.

The issue kept hanging fire right through the parliamentary elections. Only after Hooda replaced Choudhry that the process was set rolling afresh.