Agricultural mechanisation is the best bet 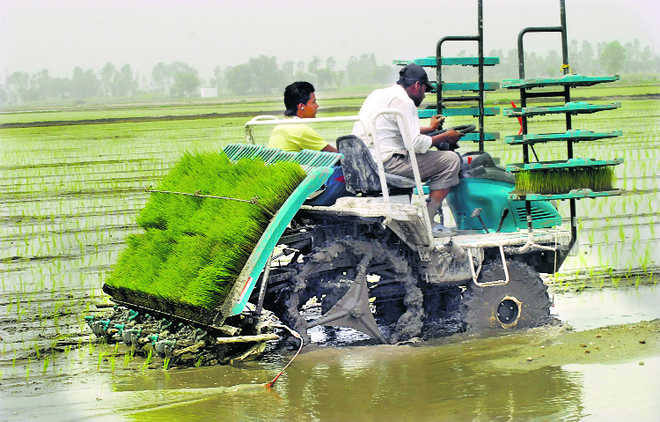 An average farmer is getting diminishing returns on investment, in the first place, due to the increasing cost of production. The most important component of the cost of production is the labour cost. It can comprise up to 50 per cent of the cost of production, especially in labour-intensive crops such as paddy and sugarcane. In the past two decades, there has been a significant rise in the labour cost, primarily due to inter-sectorial migration of labour. Consequently, the number of agricultural workforce in this period has come down by about 15 per cent, as per National Sample Survey Office (NSSO) data.

To address the issues of rise in wage rates, shortage of labour and decreasing productivity, farm mechanisation is the only available option. Several studies show that mechanisation can help in bringing down the cost of cultivation by 20-25 per cent and increasing productivity by 20-30 per cent. On the whole, mechanisation can lead to an increase in the farmers’ income by more than 50 per cent. Moreover, it can improve ease of farming, especially for small and marginal farmers, and increase the number of women farmers.

To address farm mechanisation, China — where the nature of farming is largely similar to that in India — is focusing on the creation of an ecosystem of hiring farm machines. The locus of this ecosystem is the agriculture machinery cooperatives, growing at the rate of 15 per cent per annum. These cooperatives are also an expanding market for farm machines. Consequently, there is rivalry between domestic farm machine manufacturers and many international farm equipment manufacturers are showing interest in China.

Likewise, the Government of India is relying on the custom-hiring centre (CHC) model — part of the Sub-Mission on Agricultural Mechanisation (SMAM) — to increase access of farmers to agricultural  machines. Several case studies show that it is an extremely viable model. There are cases when the CHCs set up at a cost of Rs 25 lakh with 40 per cent government subsidy have recovered the cost in less than three years. But there are also a few instances where CHCs have made crores of rupees in profit in one agricultural season itself. This clearly shows the emergence of rent-seeking tendencies simply because of the high demand for hired machines.

Yet, a CHC model lacks the depth it should have. It is doing reasonably well only in states such as Punjab, Haryana, Uttar Pradesh, Andhra Pradesh, Tamil Nadu, Madhya Pradesh and Odisha. This may be due to a number of factors. Many provisions in the Operational Guidelines of SMAM are more of regulatory in nature. For example, to obtain subsidy on the purchase of an agricultural machine, the manufacturer should be empanelled, the machine should be listed and tested and so on. Such cumbersome provisions should be done away with for the creation of a proper enabling environment.

Major budgetary support for farm mechanisation comes from SMAM and Rashtriya Krishi Vikas Yojana (RKVY). In the 2018-19 financial year, the budgetary provision for SMAM was Rs 1,165 crore, only 2.5 per cent of the budgetary outlay of the Department of Agriculture and Cooperatives (Rs 46,700 crore). This calls for an increase in the budgetary allocation for agriculture mechanisation as it can get quicker outcomes in the farm sector. But this is easier said than done. Finding fiscal space available is a tedious task. However, some fiscal space can be created internally by judicious re-allocation of existing resources.

A closer examination of Detailed Demand for Grants of the Ministry of Agriculture and Farmers’ Welfare (2018-19) shows that there are many schemes which over the years have been providing diminishing returns. In such schemes, major portions of expenditure are found on non-productive items such as salary, wages, domestic travel etc. Funds for such schemes can be reallocated for schemes such as mechanisation of agriculture to ensure better value for money.

Work for agriculture mechanisation in the Ministry of Agriculture and Farmers’ Welfare is executed through RKVY, SMAM and other schemes. It is likely that in many states a similar situation prevails. This is causing sub-optimal utilisation of funds. Hence, issues pertaining to farm mechanisation should be administered through only one scheme for greater efficiency and effectiveness.

Mechanisation of agriculture in general and formation of CHCs in the mission mode in particular hold the key to doubling farmers’ income. Probably, most of the annual devolution of Rs 6,000 to farmers under the PM-Kisan scheme will find a way to the farm itself. The CHCs will definitely benefit from it. In future, there will be a need for larger CHCs thriving in a mutually competitive environment, renting diverse equipment at cheaper rates and acting as avenues for local employment for trained rural youth.

The author, an ICAS officer, is working as Controller of Accounts, Ministry of Finance, Govt of India. Views are personal