NEW DELHI: India has more people living with HIV (PLHIVs) today than before and is witnessing more AIDS-related deaths than previously. 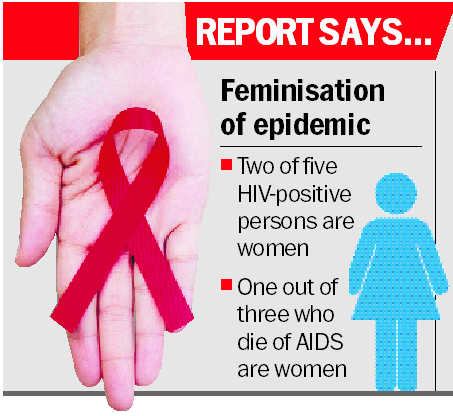 India has more people living with HIV (PLHIVs) today than before and is witnessing more AIDS-related deaths than previously.

At the current pace of progress, India will miss the global target of 75 per cent reduction in new HIV infections from the base value in 2010. “Annual new HIV infections have declined by more than 60 per cent since 2000. However, the rate of their decline has been much slower in recent years and far behind the pace needed to reach the 2020 target,” the Ministry of Health says.

A major take-away from the findings is the continuing feminisation of the AIDS epidemic in India. Slightly more than two fifths (42 per cent) of the total estimated PLHIVs in India were females.

Females constituted 40 per cent of new HIV infections among adults and 31 per cent of AIDS-related deaths among them.

With 3.30 lakh PLHIVs, Maharashtra has the highest number of HIV-positive people in India contributing 15 per cent of the total PLHIV population.

Nationally, 69, 110 PLHIVs died of AIDS related causes in 2017. AIDS-related deaths have dropped in all states, except in Haryana, Assam, Bihar, Jharkhand, Delhi and Uttarakhand.

India has pledged to end AIDS by 2030. The just notified HIV/AIDS Prevention and Control Bill that guarantees legal rights to PLHIVs is also expected to help India achieve its anti-AIDS targets.