Air quality in the city takes a hit

CHANDIGARH: Burning of effigies of Ravana, Meghnad and Kumbhkarna at various places in the city led to a deterioration in the air quality here. The air quality index (AQI) was recorded at 101 around 6 pm. 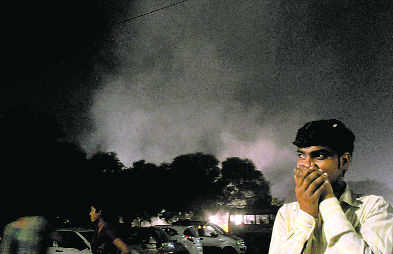 A boy covers his nose and mouth due to a rise in the pollution level in Chandigarh on Tuesday. Tribune photo: Vicky

Burning of effigies of Ravana, Meghnad and Kumbhkarna at various places in the city led to a deterioration in the air quality here. The air quality index (AQI) was recorded at 101 around 6 pm. The particulate matter (PM) 2.5 also increased in the evening and was double the normal range.

The national acceptable standard for PM 2.5 is 60 micrograms per cubic metre. However, the figures recorded were above normal. The AQI was 80 on Saturday.

The Chandigarh Pollution Control Committee measures the AQI at four places —  Sector 17, IMTECH-39, Kaimbwala village and Sector 50 — in the city manually, while it monitors the AQI on a real-time basis at a centre at Panjab University.

An official of the committee said the AQI below 100 was termed moderate. The AQI between 51 and 100 was acceptable for a healthy adult, but still posed a threat to sensitive persons. Anything more than 100 was poor, which could affect healt. — TNS