Ambani to sell stake to Aramco, BP to make Reliance debt-free by March 2021

MUMBAI: On a mission to cut debt in Reliance Industries, billionaire Mukesh Ambani on Monday announced plans to sell stakes in the firm''s oil and chemicals business to Saudi oil giant Aramco and in fuel retail network to BP plc for Rs 1.15 lakh crore. 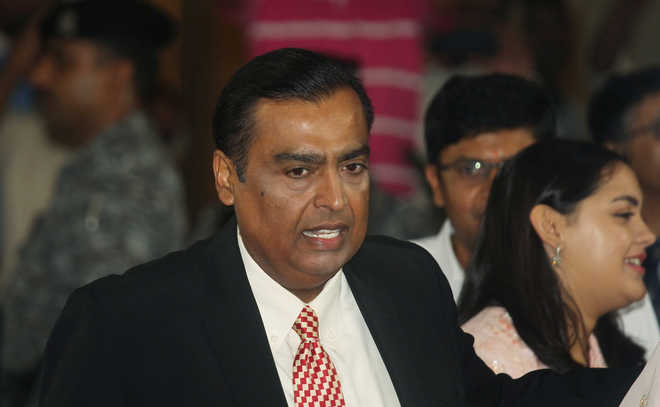 On a mission to cut debt in Reliance Industries, billionaire Mukesh Ambani on Monday announced plans to sell stakes in the firm's oil and chemicals business to Saudi oil giant Aramco and in fuel retail network to BP plc for Rs 1.15 lakh crore.

Saudi Aramco will buy a 20 per cent stake in the oil and chemicals business of Reliance, including the 1.36 million barrels a day Jamnagar refining complex in Gujarat, for an enterprise value of $75 billion. BP will buy 49 per cent stake in the firm's 1,400 petrol pumps and aviation fuel selling facilities at 31 airports for another Rs 7,000 crore.

The twin deals along with deleveraging of telecom arm Jio's infrastructure assets will help Reliance become "a zero-net debt company within the next 18 months—that is by March 31, 2021,” Ambani said at the company's annual general meeting (AGM) here.

Reliance as a whole has an enterprise value of about $134 billion, including telecom and retail businesses.

The company, which had a net debt of Rs 1,54,478 crore as on March 31, 2019, also intends to list its retail and telecommunication units within five years, he said.

Reliance has invested Rs 5.4 lakh crore, mostly in debt, in the last five years in the expansion of its oil to chemicals business, creating 4G wireless telecom network that offers high-speed internet and in setting up India's largest retail chain.

The debt levels had raised concerns among analysts, including at Credit Suisse Group AG, which felt the ballooning borrowings would weigh on growth.

Ambani sought to allay those fears.

"With these initiatives, I have no doubt that your company will have one of the strongest balance sheets in the world," he said. "We will also evaluate value unlocking options for our real estate and financial investments."            Announcing a 'new Reliance', Ambani said the Saudi investment is "the biggest foreign investment in the history of Reliance" and "among the largest foreign investments in India."      BP had previously bought a 30 per cent stake in 21 oil and gas blocks of Reliance for $7.2 billion in 2011.

The deal with Aramco covers all of Reliance's refining and petrochemicals assets as well as the remainder of stake the firm has in fuel retailing business after selling 49 per cent to BP, he said.

Stake in Reliance business is apart from 50 per cent interest Aramco along with UAE's ADNOC is picking up in a planned $60 billion refinery on the west coast of India. These investments are part of Aramco's plan to double oil processing capability under its belt to 10 million barrels a day by 2030, locking in friendly buyers for the Kingdom's crude.

The deal is subject to due diligence, definitive agreements, and regulatory and other approvals, Ambani said.

Later talking to reporters, Reliance executive director PMS Prasad said the Aramco deal is targeted to be completed by March 2020.

"Within five years, the oil-to-chemicals business will be carved out as an unlisted subsidiary of Reliance and will operate as a business division of RIL with the Aramco having 20 per cent economic interest."

At the AGM, Ambani announced roll out of fibre-based fixed-line broadband services from September 5, offering internet speed of at least 100 Mbps, free voice calls for life and HD television sets given for free along with the connection that would come for as low as Rs 700 per month. Calls will be free on fixed lines phones to anywhere in the country.

Reliance has received "strong interest" from strategic and financial investors for its consumer businesses—telecom venture Jio and Reliance Retail, he said without giving details.

With these initiatives, Reliance will have one of the strongest balance sheets in the world.

"As we achieve our zero-net debt target, I assure you, my dear shareholders, that we will reward you abundantly through higher dividends, periodic bonus issues and other means, and at a more accelerated pace than any time in our history," he said.

"Today, I want to announce that starting September 5 of this year—on the third anniversary of Jio's launch—we are launching JioFiber services on a commercial basis," he said.

Watched by his mother Kokaliben and children, he said as India is getting transformed into 'New India', "Reliance will also transform itself into New Reliance".

"We also have large and valuable real estate assets, and have a strong portfolio of financial investments," he said. "On the strength of our existing and new growth engines, I am very confident that we can grow this by 15 per cent annually over the next five years." PTI