Complete ban on polybags from April 1

AMRITSAR: The district authorities have an onerous task to keep a tab on the manufacture, sale and use of plastic carry bags as the state government has enacted a strict law to curtail the environmental pollution caused due to its excessive use. 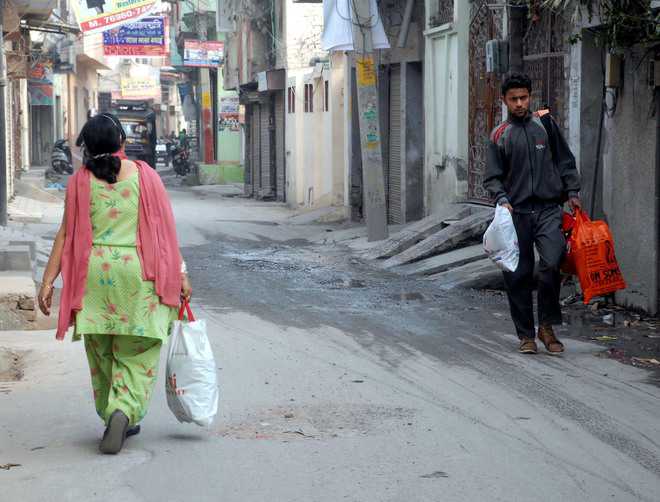 Residents carry articles for their day-to-day use in polythene bags in Amritsar on Wednesday. PHOTO: RK SONI

The district authorities have an onerous task to keep a tab on the manufacture, sale and use of plastic carry bags as the state government has enacted a strict law to curtail the environmental pollution caused due to its excessive use. The restriction on polythene bags will come into force from April 1.

The state Cabinet had accorded approval to the amendment to the Punjab Plastic Carry Bags (Manufacture, Usage, Disposal) Bill, 2016, recently.

In its previous meeting convened on December 22, 2015, the Cabinet gave its approval for the issuance of an ordinance to insert clause 2 in section seven of the Punjab Plastic Carry Bags (Manufacture, Usage, Disposal), Control Act, 2005.

There is already a ban on polythene bags below 40 microns in width, having dimensions less than 8x12 inches or not complying with the specified colours in Punjab. Non-compliance of these norms attracts a fine of Rs 25,000 or five years of imprisonment or both.

However, the Amritsar Municipal Corporation (AMC) has failed to control the rampant use of polythene bags, which seldom comply with prescribed parameters.

Polythene bags prepared under prescribed norms will also bear the name, registration number and other details of the manufacturing firm, material used for its manufacture and its thickness. There will be a ban on the use of plastic or polythene bags used for serving or transporting food items.

An environmentalist, Deepal Babbar, said, “It’s the use-and-throw culture, which intensifies the ill effects of poly bags made of a hazardous substance, which is plastic. It has been observed that animals also consume plastic bags containing food items, face health problems and die.

Besides the environment is getting littered and presents an ugly and an unhygienic scene. These bags also find their way into the city’s drainage system, resulting in blockage.”

He said, “Poly bags create an unhygienic environment resulting in health hazards and spread of water-borne diseases. They also reduce the rate of rain water percolation into the earth, resulting in lowering of already low water levels in our cities. The soil fertility deteriorates as plastic bags form part of the manure, which remains in the earth for years. Therefore, it is necessary to keep a check on the menace.”