Two cases of embezzlement worth Rs 2 crore, unearthed last week, put the district administration in a tight spot. Both the cases were very serious in nature. The first case, in which woman PCS officer Dr Anupreet Kaur was involved, has brought disrepute to the administration. 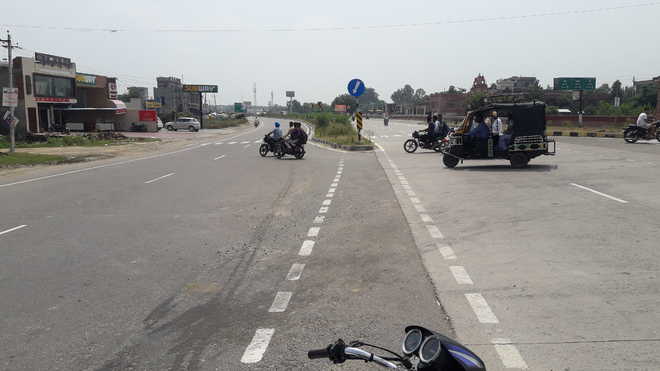 National Highway No. 54 in Tarn Taran for which farmers’ land was acquired by the administration. Photo: Gurbaxpuri

Two cases of embezzlement worth Rs 2 crore, unearthed last week, put the district administration in a tight spot. Both the cases were very serious in nature. The first case, in which woman PCS officer Dr Anupreet Kaur was involved, has brought disrepute to the administration. This case of embezzlement was worth Rs 1,63,67,975. The Patti police have registered a case under Sections 419, 420, 409 and 120-B of the IPC against the SDM and many others involved in the case. The other accused identified were Jasbir Kaur of Manawala, Bikramjit Singh of Hushiarnagar (Amritsar district), Rajwinder Kaur of Mehmoodpur and Sartaj Singh and Gurjit Kaur, both of Kot Dausandhi Mal in Tarn Taran district. Many others involved in the case are yet to be identified. Anupreet Kaur had been the SDM of Tarn Taran, Patti and Bhikhiwind, from time to time during the last 10 years. At present, she was posted in the office of Deputy Commissioner, Jalandhar. The embezzlement was committed from January 8, 2018 to February 12, 2019. The embezzled amount belongs to the compensation released by the Union Government to be delivered to those persons whose land was acquired for the construction of National Highway No. 54 passing through the district. The national highway was known as No.15 then. Navraj Singh Brar, SDM, Patti, conducted an inquiry into the case and a case was registered after SSP Dharuv Dahiya approved the inquiry report. It was detected by the inquiry officer that the accused PCS officer deposited a huge amount into the bank accounts of the accused without verifying the record of the Revenue Department. Besides, Bachitter Singh Dhillon, an international kabaddi player who married Anupreet Kaur about five years ago, was booked under the NDPS Act, but was acquitted by the court. Later, Bachitter, who separated from Anupreet Kaur, has demanded for the early arrest of the SDM.

The second case was embezzlement of the compensation amount to be distributed among those farmers who were the owners of the land falling across the fencing on the Indo-Pak border. In the case, Revenue Patwari Sunil Kumar and 12 farmers embezzled Rs 20,26,603. The Union Government had released an amount of Rs 7,02,52,200 for the affected farmers of 29 villages of the border belt for the year 2016-17. The patwari transferred this amount into the bank accounts of the accused farmers ignoring the norms as their land did not fall across the fencing. The fencing was laid behind the LOC and as the farmers faced hardships in cultivating their land, the Union Government started giving compensation to them from the year 1997.

Two teachers of the district working in the Elementary Department were honoured with the state award on Teacher’s Day by the state government. The teachers are Navdeep Singh and Sukhwinder Singh. Navdeep Singh is the head teacher of Government Smart Elementary School, Kotli Saru Khan (Khadoor Sahib block). He is also holding the post of District Coordinator of the “Parho Punjab, Padhao Punjab” project. The second teacher is Sukhwinder Singh of Government Smart Elementary School, Pandori Takhat Mal (Tarn Taran block). The teachers have not only worked hard in giving an attractive look to the buildings of their respective school with the help of donors, but also took great pains to provide quality education to students.