An Imran yorker that Punjab must dig out

IF Pakistan&rsquo;s object was to take the corridor to Kartarpur Sahib to the destination of peace and engage a reluctant India in full dialogue, the comments and actions of Prime Minister Imran Khan and army chief Qamar Bajwa on November 28, the day it organised the ground-breaking ceremony, and later, the injudicious remarks of Foreign Minister Shah Mehmood Qureshi were counterproductive. 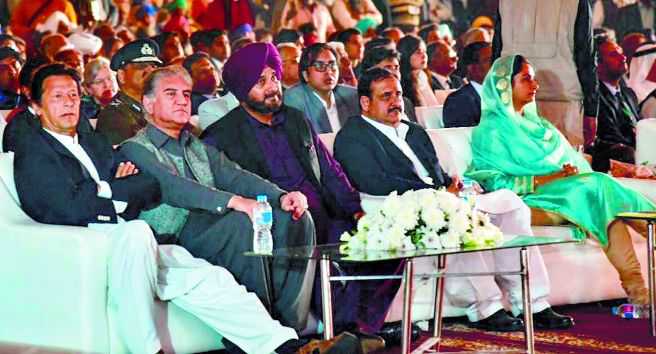 Navjot JUST A CONDUIT: Countries decide not on the basis of personal friendships, but a careful evaluation of their interests.

IF Pakistan’s object was to take the corridor to Kartarpur Sahib to the destination of peace and engage a reluctant India in full dialogue, the comments and actions of Prime Minister Imran Khan and army chief Qamar Bajwa on November 28, the day it organised the ground-breaking ceremony, and later, the injudicious remarks of Foreign Minister Shah Mehmood Qureshi were counterproductive.

Khan’s initial intention may have been to use the occasion to point to his desire for the normalisation of India-Pakistan relations. But if that was the case, he should have realised that a reference to the Kashmir issue would vitiate the atmosphere. General Bajwa’s presence was useful, for it indicated the army’s support for the corridor. But his exchange of greetings with a known Khalistan supporter raised legitimate questions of that all-powerful institution’s motivations. And, Qureshi’s exultation that Khan had bowled a ‘googly’ which had compelled India to send ministers to the ground-breaking ceremony was plain stupidity, raising doubts about Pakistan’s objectives.

India too travelled away from the Kartarpur Sahib corridor’s possibility of positively impacting the bilateral relationship. On Gurpurab, Prime Minister Narendra Modi, seeking the blessings of Guru Nanak Dev, implicitly held out the vision of a changed India-Pakistan relationship. However, in External Affairs Minister Sushma Swaraj declining the invitation to attend the ceremony and instead sending two Sikh ministers, India signalled that it was honouring Sikh sentiment more than anything else. That indication was confirmed when, on the ground-breaking day itself and when its ministers were to be in Pakistan, Swaraj reiterated India’s position that full bilateral engagement could only be undertaken once Pakistan had abandoned terror.

Swaraj cannot be faulted for drawing attention to the inappropriateness of Qureshi’s ‘googly’ boast. It is noteworthy that while the Pakistan Foreign Ministry was underlining that the Kartarpur initiative was “solely in deference to the long-standing wishes of our Sikh brethren”, the minister himself was using the cricketing metaphor — and in that context ‘yorker’ would have been better — to show how Khan, the fast bowler, had slipped one past India. In doing so, he only succeeded in eroding the effort of his diplomats. Khan’s endeavour at damage control by asserting that “it was not a googly or a double game but a straightforward decision” will hardly help.

The choice of the word “brethren” in the statement reveals Pakistan’s long-held desire to build enduring bridges with Sikhs all over the world, and especially in India. For decades, Pakistani official propaganda targets India’s minorities, including Sikhs, and seeks to create schisms between the majority community and the minorities. It projects the minorities to be under majority yoke. The fact that it will never succeed in its vain attempt at diluting the patriotism of India’s Sikhs does not and will not deter Pakistan from making attempts to do so.

The role of Navjot Singh Sidhu is merely a distraction to the larger issues surrounding the Kartarpur Sahib corridor. Countries take decisions on issues such as the corridor, which had remained stuck — but not always in focus — for decades, not on the basis of personal friendships but a careful evaluation of their interests. Individuals can become conduits for messages or hasten or retard processes, but by themselves, they can never solely deliver. Mutual praise between Khan and Sidhu may have made for catchy TV shows but is meaningless in achieving results in difficult bilateral ties as between India and Pakistan. Sidhu’s comments and actions added passing grist to the domestic political mill but even here they are hardly of enduring relevance.

Apart from the physical construction of the corridor, which Pakistan wants to complete in time for the 550th Gurpurab, the two countries will have to work out the procedures for its use by the pilgrims. The Pakistan Foreign Ministry’s statement noted, “We also look forward to working out necessary details and modalities with the Indian side concerning passage through the corridor.”

In addition, India will have to seek guarantees that Pakistan does not inflict Khalistani propaganda on the pilgrims. This is especially important as Pakistan routinely does so on Indian Sikh jathas during their visits on important festivals. India may have to insist that its officials are allowed daily access to the Pakistani side of the corridor to look after the welfare of the pilgrims. If the corridor is not handled properly, it may become a source of constant bilateral friction instead of promoting goodwill.

Pakistan plans accommodation and facilities around the Kartarpur gurdwara to fully utilise the potential of religious tourism. These will obviously not be within the corridor but in close vicinity of the gurdwara. It obviously hopes that these will attract Sikh pilgrims from the world over. Some visas to Indian Sikhs may be forthcoming for this purpose too. Does such a project and indeed the corridor itself indicate fresh thinking towards India brought forth by its current economic difficulties as well as a realisation that without the normalisation of ties with India, Pakistan will not be able to become really stable let alone prosperous? Unfortunately, there is no evidence to indicate so, especially in the army.

The fact is that Pakistan will have to radically change course so that a full dialogue with India can take place. For that, Pakistan will have to redefine its approach to the use of terrorist groups against India. Pakistan is hardly going down that path, for it is keeping Khalistani elements within its territory and also supporting them outside. The assessment that Indian security agencies cannot be complacent on the Khalistani front is valid. The Kartarpur Sahib corridor, while a good and welcome development for Sikh pilgrims, may add to the concerns of Indian security managers.