Fifty-two years after the death of Chandigarh&rsquo;s founding father, Le Corbusier, 67-year-old Rajnish Wattas and 44-year-old Deepika Gandhi are savouring the fruit of their year-long labour. 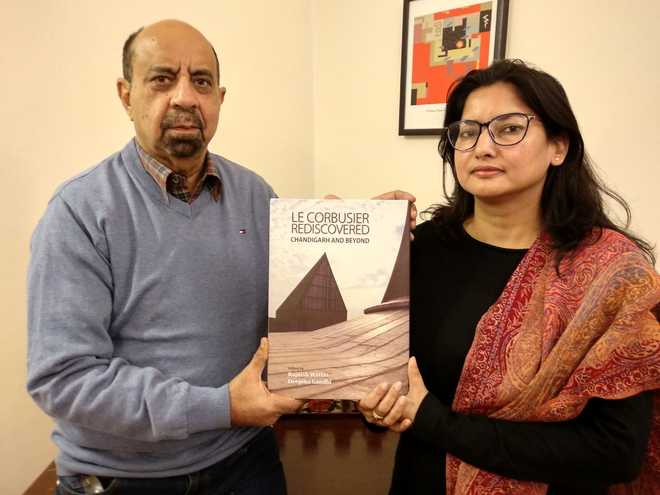 Fifty-two years after the death of Chandigarh’s founding father, Le Corbusier, 67-year-old Rajnish Wattas and 44-year-old Deepika Gandhi are savouring the fruit of their year-long labour. The former principal of Chandigarh College of Architecture, Wattas, and director at Le Corbusier Centre and Chandigarh Architecture Museum, Gandhi, have been buckling down to edit and compile a comprehensive book on the works of Le Corbusier in Chandigarh and beyond—an idea they conceived at the 2015’s International Symposium. The book, titled Le Corbusier Rediscovered—Chandigarh and Beyond, will be released on Friday.

Inception of the idea

“One of the two catalysts that galvanised the idea of compiling a book on Corbusier was the absence of recently authored books documenting the sprucing up of the Capitol Complex during its run up to the UNESCO tag,” Wattas says. “The other reason was to have an updated version of the city’s changing architecture from experts and their understanding of Corbusier.”

“Also, it is for the first time that Chandigarh’s Masterplan will be published in a book,” Wattas reveals. There are four sections in the book, Le Corbusier: The Timeless in Modern, Le Corbusier’s Imprint: India and Beyond, Chandigarh’s heritage is world heritage, and Chandigarh: Garden City to Smart City.

With more than 250 pictures, the book comprises essays by experts on architecture, and authors, like Alfredo Brillembourg, Jacques Sbriglio, BV Doshi, Jagan Shah, MN Sharma, Michel Richard, PL Verma, Rahul Mehrotra, Raj Rewal, SD Sharma, Sumit Kaur, William J Curtis and Rajnish Wattas. “We reached out to eminent architects who attended the International Symposium on Corbusier’s 50th death anniversary in 2015. Some of these authors had known Corbusier personally, like William, while others, such as Michel Richard have been associated with projects related with conservation of Corbusier’s architectural heritage. Michel is the director of Le Corbusier Centre in Paris,” shares Wattas, while justifying his choice of writers.

“In fact, there is a foreword by BV Doshi and a special article by PL Verma, who got Le Corbusier to design Chandigarh in 1950. We have also published an excerpt from the city’s first chief architect MN Sharma’s book on Corbusier,” adds Deepika. “In 1987, I had asked Verma to write about Corbusier for a magazine called Architecture+Design. The book has the same essay, and it’s rare because Verma hasn’t written many articles,” adds Wattas.

Published by Niyogi Books, the royalty of the book, Le Corbusier rediscovered—Chandigarh and Beyond will be given to the Tourism department of the UT Administration, informs Wattas. “It’s only fair because the international symposium was organised and sponsored by the administration. Besides, well-known historian and author of the book Le Corbusier Ideas and Forms, William Curtis, who otherwise quotes a hefty sum for his writing, has written the key note of the book and an essay in it without any pecuniary interest,” he says.

However, the biggest challenge that Wattas and Gandhi faced while editing the book was not as much to do with arranging its contents, but making a logical layout. “Architecture cannot be understood without pictorial references, so the designing had to be done in a way that pictures were coordinated precisely with the text. Also, it was a task to get high-resolution pictures, but the contributors were very helpful. In fact, we arranged the picture of last year’s ‘Yoga Day’ celebrations at the Capitol Complex from The Tribune,” Wattas says.

While editing, though, which most consider a ‘thankless job’, Wattas had the time of his life! Just that he wishes to never have that time come back to haunt him again. “I was more of a ‘pesterer-in-chief’ than an editor-in-chief of this book, because I was constantly calling people and reminding them to write their essays. I received some five essays that were 5,500-word long and I edited them... after this book is launched, I don’t want to hear, read, or talk about books, at least for a while,” he signs off.