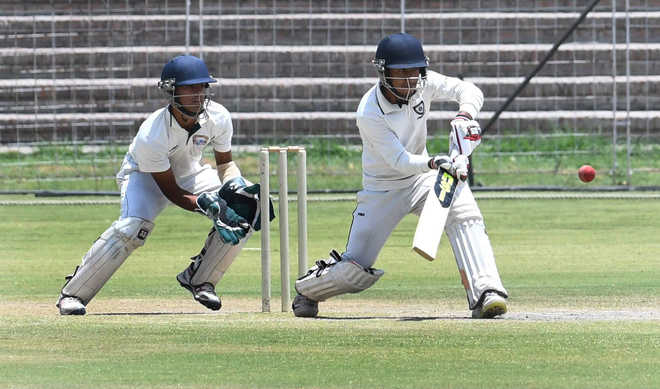 A batsman during the Punjab Inter-District Championship for the DP Azad Trophy at the Sector 16 stadium on Friday. Photo: Manoj Mahajan

In reply, Chandigarh posted 255/7 in 49.1 overs. Openers Ishan Goyal and Azad posted a 101-run partnership before the former was dismissed by Anshul Negi for 33 off 58 balls, with four boundaries. Azad was joined by Jashonjot Singh and the duo raised an 88-run partnership for the second wicket to take the total to 189. The partnership was broken by Ashwin when he accounted for Azad (105 off 116 balls, with 14 boundaries).

Chandigarh will face Amritsar in the final of the championship on June 17. In their last league encounter, Amritsar defeated Jalandhar by seven wickets. Winning the toss, Jalandhar were bowled out for 147 runs in 48.4 overs after struggling at 80/9 in 32 overs. Azam Nazar and Raghav Sharma added 67 runs for the last wicket to get Jalandhar close to 150. Nazar scored 93 off 122 balls, with 11 boundaries and three sixes, while Sharma remained unbeaten on 1 off 31 balls.

Amit Kumar (4/37), Dipanshu (2/24) and Manroop Singh (2/19) did most of the damage with the ball. In reply, Amritsar scored 150/3 in 38.1 overs. Sahil Sharma scored 57 off 72 balls, with 10 boundaries, and Puru Sharma made 38 off 61 balls. The duo put on 40 runs for the third wicket. After Sahil Sharma’s departure, Manproop Singh joined Puru and the two took the team’s total to 150. They raised an unbroken fourth-wicket partnership of 57 runs. Raghav Sharma, Lovepreet Singh and Saurav Ratan claimed a wicket each.

In reply, Patiala’s openers Pukhraj Singh and Hareen Goel scored 102 runs in 8.4 overs to record an emphatic win against Bathinda. Pukhraj scored 61 off 24 balls, studded with seven boundaries and four sixes, while Goel remained unbeaten on 37 off 28 balls.

Riding on a brilliant century by Nehal Wadhera (117 off 115 balls, with four boundaries and four sixes), Ludhiana registered a 179-run victory over Ropar. Winning the toss and opting to bat, Ludhiana amassed 293/4 in 50 overs. Wadhera was involved in a 117-run second-wicket stand with Jaish Jain (75 off 93 balls) and a 118-run fourth-wicket partnership with Vaibhav Kalra (68 off 48 balls). Kabir Rana and Sarabjit Singh claimed a wicket each for the bowling side. In reply, Ropar were bundled out for 114 runs in 35 overs.