JAKARTA: Former United States President Barack Obama has called on the world to stand up for tolerance, moderation and respect for others, while warning that sectarian politics could lead to chaos and violence. 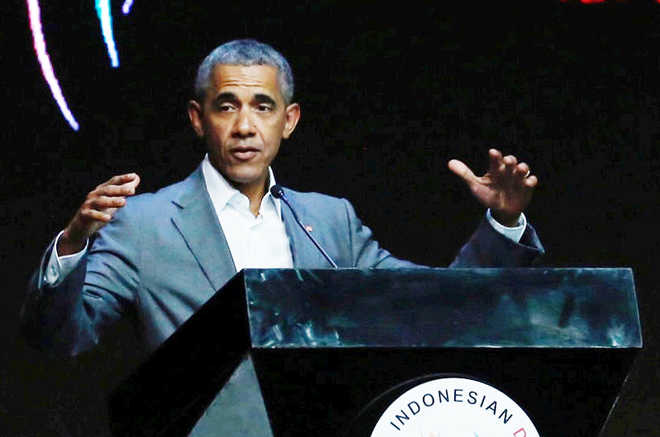 What we will see is more and more people arguing against democracy, says ex-US President. Reuters

Former United States President Barack Obama has called on the world to stand up for tolerance, moderation and respect for others, while warning that sectarian politics could lead to chaos and violence.

In a freewheeling speech in Indonesia on Saturday, Obama said some countries had adopted “an aggressive kind of nationalism” and “increased resentment of minority groups”, The Guardian reports.

“It’s been clear for a while that the world is at a crossroads. At an inflection point,” Obama said, telling a Jakarta crowd stories of how much the capital had improved since he lived there as a child, in what could be seen as a commentary on the US as well as Indonesia.

“If we don’t stand up for tolerance and moderation and respect for others, if we begin to doubt ourselves and all that we have accomplished, then much of the progress that we have made will not continue,” he added.

“What we will see is more and more people arguing against democracy, we will see more and more people who are looking to restrict freedom of the press, and we’ll see more intolerance, more tribal divisions, more ethnic divisions, and religious divisions and more violence.” Obama was born to a Kenyan father and an American mother. The family moved to Jakarta in 1967 when he was six, and stayed for four years. — ANI