‘Efforts over treatment plant not to go waste’

With 30 acres of land and infrastructure provided by Punjab Government, we are collecting garbage from the city besides 17 other urban local bodies (ULBs) in Bathinda and Mansa districts. 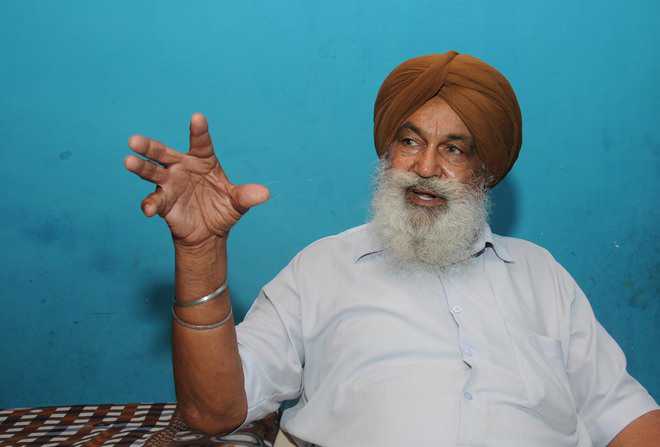 Why are you opposing the setting up of solid waste management plant, which would help in producing power and also in getting rid of the city’s waste?

Our only concern is that once it starts, none of the area residents in the 10 to 11 localities would be able to reside here anymore. The entire area would have to deal with unbearable stench, smoke, filth, garbage and diseases. There is no point in setting up such a plant just two kilometers away from the heart of the city and a few meters away from the thickly populated residential areas.

Why is it said that there is politics behind the agitation against this plant?

There is politics behind everything, without this nothing is achieved. But apart from politics, there is the plight of the people as well. During every trial run of this plant, unbearable stench fills the air in an area that covers a radius of more than 5 km radius and it’s so irritating that we would never be able to stay here if this plant is set up forcefully against the wishes of the local residents.

How many localities are actually suffering due to the foul smell?

The localities closest to this are Harbans Nagar, Nachhattar Nagar, Mati Das Nagar, Ganpati Enclave, Housefed Colony and to some extent the houses in Guru Ki Nagri and other small localities.

You lost the case in National Green Tribunal (NGT), which allowed this plant to run at the same place where it is at present. What is your next move?

We have faith in the Indian judicial system. So what if the NGT did not pass a verdict in our favour. We are in the process of knocking the doors of the Supreme Court. With public help, we managed to collect nearly Rs 7 lakhs in the past two years, which were spent on litigation, lawyers' fee and other expenses. We will not sit idle until the plant is shifted somewhere else.

Why is the government not shifting this plant despite so much of hue and cry?

The reason behind this is simple. The government managed to provide 20 acres of land to the company which actually belongs to the Wakf Board. For proper setting up of plant, at least 35 acres of land is required. One of the five plants in India is at Okhla in Delhi which has 35 acres of land. Despite this, people in the surrounding areas suffer from many diseases and keep raising a hue and cry every now and then. If the plant is shifted outside, then the government will have to purchase extra land and it would also put extra burden on the company besides increasing the transportation cost.

The company officials say that before the setting of this plant, the waste of the city was being dumped here but nobody bothered then and there are only a handful of local leaders who are against its setting up.

It was not only this place where garbage was being dumped earlier as many other areas too were being used for dumping the waste. We are not against the dumping of garbage at open places across the city but the dumping of 17 ULBs at just one point and that too within the residential locality.

The JITF officials claim that if the public allows them to start this plant, it would ultimately be in the larger interests of the public and residents of Bathinda?

Do you know how much pollution the Guru Nanak Dev Thermal Plant is emitting? Exactly similar claims were made by the government during the setting up of a thermal power plant in those days around three decades back. So, once bitten, twice shy. We will never allow this plant to run at any cost as we know the gimmicks, tactics, false claims and modus operandi and the sufferings of the people.

Will this issue become a hot topic for debate in the coming assembly elections and affect the voters?

Definitely, we will highlight the issue at every front, especially during the elections. Though I am a Congress worker, I have categorically informed my Akali counterparts about taking up the issue at the highest level in larger public interest. Else, we will blow this issue out of proportion during the coming elections. It is ultimately the SAD leadership which is hell bent upon not shifting this plant away from the city area.

Please throw some light on this project.

With 30 acres of land and infrastructure provided by Punjab Government, we are collecting garbage from the city besides 17 other urban local bodies (ULBs) in Bathinda and Mansa districts. Once it starts working, apart from refused derived fuel (RDF) and city compost, this plant will also generate 12 megawatt of power per hour.

What is the hitch in starting the problem?

Hardly anything has been done by the government to launch the project since 2011 due to public pressure, litigation and the government's apathy. Our company is facing an estimated annual loss of nearly Rs 3 crore due to the delay.

So, what is the present functioning of your company if the project is still in the pipeline for the past four years?

We are collecting 330 tonnes of garbage everyday from Bathinda city. The entire waste is buried in two pits (2.5 meters each, spread over 5 acres). A polythene sheet is spread before the dumping of waste in the earth. It is then covered with soil, using machines. One pit is already full and the second pit would now be used for dumping.

Will this dumped waste be of any use at a later stage?

What infrastructure are you using and how much money are you charging from the public in lieu of collecting the garbage?

We have nearly 500 vehicles, including trucks, small vehicles and rehris. As many as 350 workers in Bathinda collect waste from houses and commercial establishments which is further collected from 36 secondary collection points. Municipal Corporation Bathinda (MCB) pays us Rs 10 lakh per month as tipping charges for shifting the garbage and we collect Rs 15 lakh monthly as user charges from the public. The company has so far spent Rs 24 crores on this plant. The revenue from the user charges has increased threefold in the past two years as it was Rs 5 lakh in the beginning.

What is the present condition of this plant and how much time will it take for completion?

It is likely to be completed in March 2018. The project is under the observation of Punjab Pollution Control Board (PPCB), which has formed a five-member committee. Three agencies—Fairlap Gurgaon, Cloutech Yamunanagar and Thapar University—have been roped in to check odorous gas sampling/analysis and to know what concentration of chemical and technology should be used to run this plant.

Then why is there so much hue and cry by the public despite your company's claims of following such norms?

There is politics, a jaundiced approach, lack of awareness among the masses, poor handling of such a big project and numerous other reasons.

Why do people say this plant emits so much of pollution and bad smell every time it is run on trial basis?

Apart from the daily collection in the open, we also have 4,000 tonnes of garbage lying inside our plant which is covered from all sides. We are almost sitting upon this much of garbage (at JITF office), do you smell anything? We have installed the wind meter to know in which direction the wind is blowing. Actually, the sewage treatment plant (STP) situated adjacent to our plant and the sullage carrier emit unbearable smell. At times, we are surprised when people call us from areas situated in opposite directions about the wind carrying the foul odour.

Despite your tall claims, area residents have been demanding the shifting of this project away from the residential area. Commuters too are facing problems as major city roads double up as 36 secondary garbage collection points.

We are not into the business of preparing noodles or other edibles. If we have to re-use the waste, then it will indeed emit some foul smell but we are adopting every scientific method to control it. Once it starts working, the project would help in killing two birds with one stone as the waste material will be disposed of and power can be generated. This will reduce our dependence on coal to generate electricity.