Assault case: Lawyers up in arms against city police

BATHINDA: The strike by lawyers on Tuesday entered its third day. The lawyers have been protesting against the Bathinda police for registering a case against former District Bar Association president Navdeep Singh Jeeda. 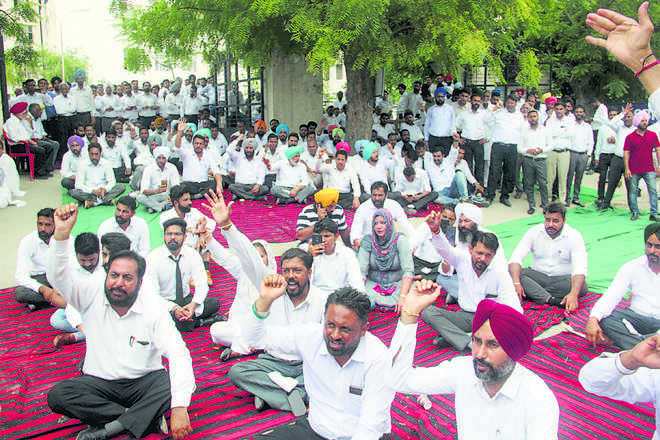 Members of the District Bar Association protest against the police outside the SSP office in Bathinda on Tuesday. Tribune photo: Pawan Sharma

The strike by lawyers on Tuesday entered its third day. The lawyers have been protesting against the Bathinda police for registering a case against former District Bar Association president Navdeep Singh Jeeda.

On Tuesday, they protested on the road outside the SSP office. District Bar Association (DBA) president Kanwaljit Singh Kutti said, “We have given a call for a state-level protest for Wednesday and advocates will suspend work in the district.”

He said they want cancellation of a case registered against Navdeep Jeeda and action against police constable Ranjit Singh.

While addressing the protesters, lawyers alleged that without holding any probe into this incident, the police announced the verdict by registering a case against advocate Navdeep Jeeda. They said no action had been taken on the complaint of Jeeda against Ranjit Singh, who fractured his nose.

Members of Punjabi Maa Boli Satkar Sabha have announced their support to the lawyers in this incident.

Members of the Police Pensioners’ Welfare Association of Bathinda district held their meeting here on Tuesday. The meeting was headed by former SSP Sukhdev Singh Chahal, who is the association’s president.

In a press statement, association members said they discussed the issue of advocate Navdeep Jeeda and police constable Ranjit Singh.

The members said they had seen video clips going viral on the social media. They added that it was clear that Jeeda had hit a slap on the police constable. Moreover, it is also clearly seen that constable Ranjit Singh was rightly performing his duty, they added.

The members said advocates were wrongly supporting Jeeda to built pressure on the administration.