BATHINDA: Symbolising the victory of good over evil, effigies of Ravana, Kumbhakarna and Meghnad were set ablaze at several places in the city to celebrate Dasehra on Tuesday evening. 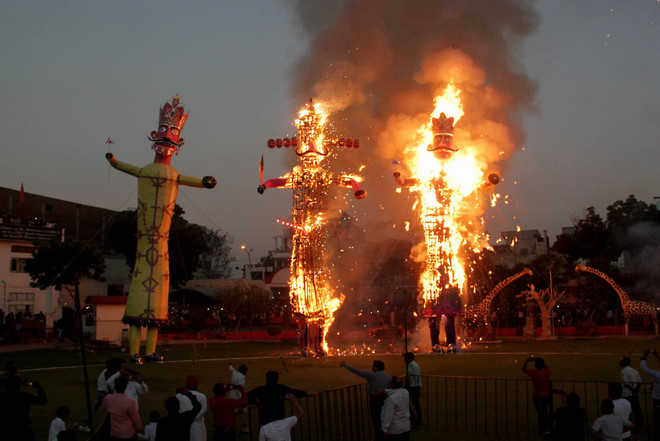 Effigies of Ravana and Kumbhkarna being burnt.

Symbolising the victory of good over evil, effigies of Ravana, Kumbhakarna and Meghnad were set ablaze at several places in the city to celebrate Dasehra on Tuesday evening.

Scenes from the lives of Lord Rama and his fight with the Ravana were enacted before the effigies were set ablaze around sunset.

City residents witnessed an impressive show of firecrackers as well as the bursting of cracker-stuffed effigies of the Ravana, Kumbhakarna and Meghnad.

Fireworks lit up the sky after the sunset and the demons were reduced to ashes after Lord Rama, Lakshmana and Ravana enacted a fight.

Manpreet greeted residents on the occasion wishing peace, prosperity and happiness for all.

Deputy Commissioner B Srinivasan and SSP Dr Nanak Singh also attended the event, along with the Finance Minister, at Model Town.

However, the authorities failed to stop youngsters from running towards the burning effigies to collect the partially-burnt wood as these are believed to bring good fortune if these kept at home.

City roads witnessed traffic snarls on the occasion. Vehicles were parked along the roadsides, adding to the woes of commuters.

Traffic policemen had a tough time in regulating traffic and controlling the crowd.