BATHINDA: The programme to flag off the new mini-buses has been postponed for now following the demise of PRTC chairman Avtar Singh Brar. 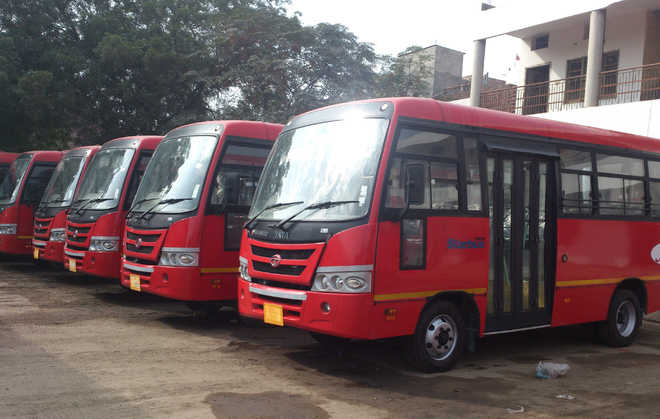 With the new mini-buses becoming operational, a large number of people living in around 50 wards of Bathinda will be benefitted. A Tribune photograph

The programme to flag off the new mini-buses has been postponed for now following the demise of PRTC chairman Avtar Singh Brar.

Around 18 buses that were being cleaned till this evening for the flag-off ceremony at the local PRTC workshop in Bathinda today will now not be sent to the Bathinda airport where it has been scheduled to be flagged off by Punjab Deputy Chief Minister Sukhbir Singh Badal along with the inauguration of the airport on Sunday.

Brar, who was a part of the Congress for 41 years, joined the SAD in October 2013 following his differences with Capt Amarinder Singh and Partap Singh Bajwa while he was appointed as Chairman, PRTC, by the SAD-BJP government.

With these buses becoming operational, a large number of people living in around 50 wards of the city will be benefitted in Bathinda. The plan was to start these buses in the city tomorrow. However, the GM, PRTC, Bathinda, till today was not prepared with the schedule of the buses.

However, the Mini-Bus Union, Bathinda, had earlier requested the Bathinda Deputy Commissioner and the PRTC to not to run these buses in villages where already private mini-bus operators are running their buses. The union also urged that there had been no permits given to these buses to run in villages.

PRTC General Manager HS Khaira said: “Following the demise of the PRTC chairman, the programme to flag off the mini buses has been postponed for the time being. These buses have been purchased by the Municipal Corporation Bathinda. It is yet to be decided that who will run these buses though there are more chances that the PRTC would be given the charge. The fares would be on a par with the prevalent government bus charges while the minimum expected fare is Rs 5.”

Its noteworthy that after a long time a decision was taken to run these buses along with the PRTC. The MCB had thrice floated tenders to get run these buses operated by private transporters. Earlier, Union Cabinet Minister Harsimrat Kaur Badal and Deputy Chief Minister Sukhbir Singh Badal had also instructed MCB officials to start the mini-bus service project in the trans-railway line area and other areas in the city at the earliest. In 2013, the MCB had given instructions to buy 20 mini-buses but due to lack of funds, the scheme could not be started. However, with elections ahead in the state, the government has provided funds to start the service.

Residents of a number of areas, including trans-railway lines, in Bathinda have no option but to travel by auto-rickshaws.

Following this, the MCB acting on the instructions of the government decided to provide the services of mini-buses in the city. Already, there are 10 city buses running in Bathinda city. However, three to four buses remain parked at the workshop following technical issues.

Made by Tata company, the new buses have cameras and LED and direction display. With auto-doors and computerised emergency windows, each bus has 18 seats and can adjust 10-12 persons who can stand in the aisle of bus.