CHANDIGARH: The world’s first book on medical autopsies was released during the foundation day celebrations of the PGIMER today. The book titled ‘101 Medical Autopsy Cases- Adult and Paediatric’ was written by Dr Nandita Bharadwaj Kakkar, Professor, Department of Histopathology, PGIMER. 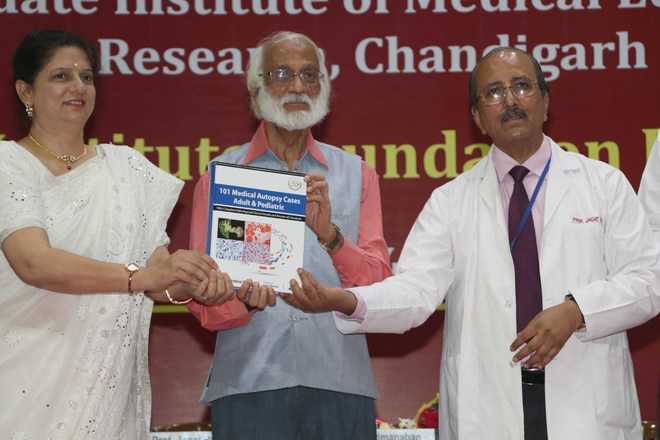 The world’s first book on medical autopsies was released during the foundation day celebrations of the PGIMER today.

This is the first book in the world literature to have compiled medical autopsies in such a comprehensive and case-based manner. Medical autopsy is the strongest teaching tool in medicine and has no substitute. It is the most scientific method to learn medicine.

Unfortunately, the practice of medical autopsy has declined worldwide, but the Department of Histopathology, PGIMER, still performs 500 medical autopsies every year. Three clinicopathological correlation conferences, which are held every week, are relayed ‘live’ to 14 medical schools across India and are a ‘Pride of PGIMER’.

These ‘101 cases’ have been presented in the routine clinicopathologic correlation conferences and is a collection of the author’s 27 years of service in this institute. She says this was a call beyond her duty to compile this immensely valuable learning material, which probably would have got deleted from her computer, once she would retire. “For knowledge to live, its propagation is a must,” she said.

This book has over 3,500 photographs. The author says the idea for the compilation of this academic wealth goes to her father late Col RK Bharadwaj, a dedicated soldier, also known as the ‘Hero of Sehjra’. This book is dedicated to all 101 cadavers on whom medical autopsy was performed and who paved the way to this wealth of knowledge.