Books Review : Who Thought This Was a Good Idea? And Other Questions You Should Have Answers to When You Work in the White House by Alyssa

Now, this is life! “When I travelled for work, I took Air Force One, which never got old, and instead of wasting time at boring conference centres I was doing things like eating goat in the courtyard of Hamid Karzai’s palace. 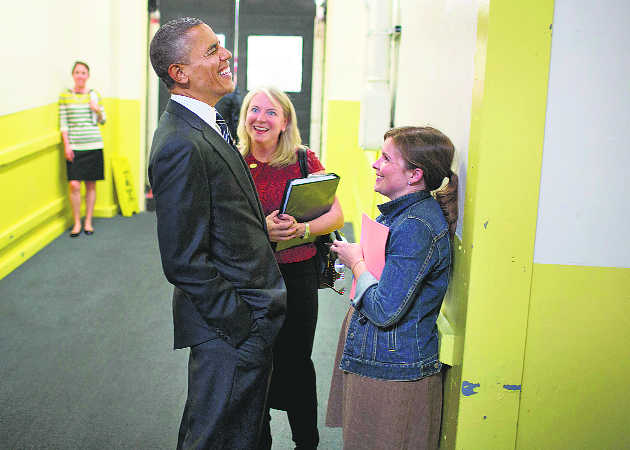 The man with a golden heart: President Barack Obama talks to Julianna Smoot and Alyssa Mastromonaco (right) at the Capital Hilton in Washington, D.C. on September 28, 2012. The book is a warm and vivid narration of the author's (right) days in the White House and where Barack Obama, the man, comes across as a tough boss with a tender heart Official White House Photo by Chuck Kennedy/courtesy Little Brown/Hachette

Now, this is life! “When I travelled for work, I took Air Force One, which never got old, and instead of wasting time at boring conference centres I was doing things like eating goat in the courtyard of Hamid Karzai’s palace. They wouldn’t let me inside because I was a woman and they didn’t believe I was actually part of the senior staff that was cleared to go in, but still: Not much is cooler.” But, wait, for every glamorous moment, there are many, many more of hard work, racing against the deadline all the time and nail-biting finishes.

Alyssa Mastromonaco was the youngest woman ever to be White House deputy chief of staff for operations. She was in Barack Obama’s team for a decade. “If the Obama presidential campaign would have had the title of conductor – a person to keep the trains running on time and the symphony playing together – her name would have been Alyssa Mastromonaco,” said a profile on her by New York Times just as she joined the White House. Tellingly, it was titled: “A Quiet Obama Puppeteer”.

Scheduling is among the most gruelling jobs, describing which can be various shades of boring. However, in the hands of the author and her co-author, it becomes quite engaging as you get a ringside view of the planning for President Obama’s inauguration; visiting Iraq ... We also get stories behind preparation for Hurricanes Sandy as it hit Puerto Rico, New York, and New Jersey. The details show how much leadership and preparation goes into coordinating the relief effort, and how difficult it is to get the real picture of what is on the ground. Team Obama’s handling of the hurricane effort got it high marks and remains a benchmark.

The self-depreciating tone tends to undersell the major achievements of the author and her boss. Yes, she can rightly take credit for getting the first tampon dispenser installed in a White House loo, but such was the impact of the change that later in the book we read about the President asking staff to ensure that diaper and feminine health products are supplied to the victims of Hurricane Sandy.

The solidarity of the female staff in a place where they still are too few comes forth with girls looking out for each other.

Barack Obama, the man, comes across as a tough boss with a tender heart, one who gifts his staff gold bracelets, commiserates with the author about the loss of her cat, gossips about her love interest, and arranges for her to be with him on Marine One so that she can visit Windsor Castle and meet the British Queen.

This warm, bubbly, vivid narration of Mastromonaco’s Obama Days is meant to draw in more women into political lives. In so far as it humanises high-level political interactions, the book succeeds brilliantly. Those looking for insights (read muck) into the political machinations that inevitably take place in such places will have to look elsewhere. An expose it is not. With chapters on leadership, preparation, tips about preparedness, independence, self awareness, confidence, humility, risk-taking, resilience and kindness, the intent is to inform, and perhaps, inspire young politically-minded women. This is not a legacy-building exercise, although it does so without grating on the readers’ nerves.

It is difficult for people to imagine how gruelling such a job can be. As the author says at one point: “For every glamorous state dinner, every surreal conversation about 80’s music with a foreign dignitary, every glass of champagne on Air Force One, there is a 4.00 am conference call...My hair turned completely white from stress. That’s how it is. You kind of know what you are getting into when you start, but you also have no idea what it will really be like.”

She had her cats for company. Shrummie, a Hurricane Katrina survivor, came into her life long before her husband did. Shrummie was such a part of Mastromonaco’s family that when the pet died a year after the author left the White House, President Obama called her from Air Force One to commiserate with her. Says so much about the woman who devoted nine years of her life to Obama...and her boss.

Alyssa Mastromonaco was a path breaker in politics. She was there at crucial moments during the Obama Administration. Her competence won her acclaim, and her self-depreciating humour, which she exhibits in this book, and the engaging narration of events she orchestrated or was a part of, have found her an audience that has propelled the book to the bestseller charts. She is now with a new-age media company and still has an interest in politics, which may find her in another role, at another point.