AMRITSAR:Amritsar’s once famous fan manufacturers and carpet weavers are on the verge of extinction due to high input cost, shortage of skilled labourers, lack of innovation and flight of production units to other states. 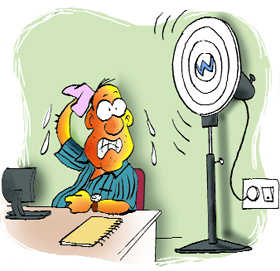 Amritsar’s once famous fan manufacturers and carpet weavers are on the verge of extinction due to high input cost, shortage of skilled labourers, lack of innovation and flight of production units to other states.

The number of fan manufacturers has shrunk to less than 70 from over 2,500 units in early 80s, industry experts said. Amritsar, which was a major hub for producing various types of fans — ceiling, table, exhaust and pedestal — is now struggling to survive.

“Gradually, Amritsar industry has lost to other production centres such as Ghaziabad, Delhi and Varanasi. As these centres are closer to source of raw materials, the Amritsar units lost on competitiveness,” said Baladev Singh, a fan manufacturer of Amritsar.

Skilled workers also migrated for better future to other states with the growth of similar industrial clusters in different parts of North India, the  manufacturers said.

Former fan manufacturer-turned-hotelier Satnam Singh recalls that once flourishing business has become a cottage industry where the proprietor is the worker and his residence is the workshop. He blames the government’s apathy for the misery. “Leave aside any bailout package, no government ever bothered to even constitute a commission to take stock of the problems the industry is facing,” he said.

The government officials have been evasive on this matter. The department does not keep trade-specific numbers of industrial units. Besides, it is not mandatory for industries to register themselves with the department, Department of Industry and Commerce Deputy Director BS Brar said. He said no assessment was ever carried out to know the status of local industries.

The carpet industry of the city has a similar story. It has been facing hard times because of acute shortage of trained manpower.

The city, which was once known for hand-made Persian-style carpets (Bukhara style), is witnessing its extinction. The city had seen the glorious days of carpet weaving as Amritsar’s products used to be exported to Russia and European countries until 1995.

Punjab working out plan to buy wheat from farmers’ doorstep