HOUSTON: Prime Minister Narendra Modi had a "wonderful interaction" with the CEOs from the US oil and gas sectors and discussed how to harness opportunities in the area to address India''s growing energy needs. 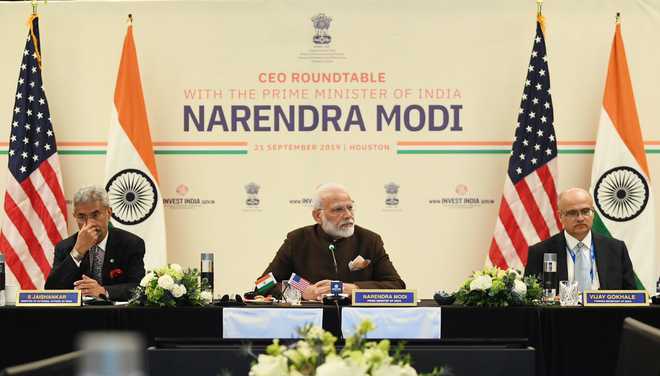 The roundtable on Saturday focussed on working together for energy security and expanding mutual investment. Image: Twitter/ @narendramodi

Houston, September 22
Prime Minister Narendra Modi had a "wonderful interaction" with the CEOs from the US oil and gas sectors and discussed how to harness opportunities in the area to address India's growing energy needs.
The roundtable on Saturday focussed on working together for energy security and expanding mutual investment opportunities between India and the United States.
"It is impossible to come to Houston and not talk energy! Had a wonderful interaction with leading energy sector CEOs. We discussed methods to harness opportunities in the energy sector," Modi, who arrived here on a week-long visit to the US, said in a tweet after the meeting.
The CEOs of 17 global energy companies took part in the meeting. They have a combined net worth of USD 1 trillion with a presence in 150 countries, Raveesh Kumar, MEA Spokesperson Raveesh Kumar said.
He said that all the companies present in the meeting have some kind of engagement in India.
The Prime Minister also witnessed the signing of MoU between US natural gas company Tellurian Inc. and Petronet LNG Limited (PLL) of India after the meeting.
As per the MoU, PLL will invest USD 2.5 billion in Tellurian's proposed Driftwood LNG export terminal, in exchange for the rights to 5 million metric tons of LNG per year over 40 years. The two companies will endeavour to finalise the transaction agreements by March 31, 2020.
Earlier, the Prime Minister's Office (PMO) had posted on Twitter a couple of photographs of Modi's meeting with the chief executive officers (CEOs) of some of the top oil companies based in the US.
"Further energising India-USA friendship. Among the first engagements of PM @narendramodi in Houston is a meeting with CEOs from the energy sector. India and USA are looking to diversify cooperation in this sector," the PMO tweeted.
Noting that there has been considerable improvement in doing business in India, the CEOs, during their interaction with Prime Minister Modi, welcomed the recent steps taken by his government to reform and liberalize the economy, including cutting down the corporate tax structure.
The CEOs talked about enhancing their footprint in India and lauded the Indian government for steps taken towards deregulation in the sector, the MEA spokesperson said.
He said that the CEOs were thankful to the Government for the support and facilitation.
“We made some suggestions and he (Prime Minister Modi) was very receptive to it,” Seifi Ghasemi, CEO of Air Products told reporters after the energy roundtable with the Prime Minister.
“We made suggestions about hydrogen technology,” Ghasemi said in response to a question.
“The meeting was very, very productive. Specific suggestions that they (CEOs) made was about India has a lot of coal, especially low quality coal. They said they have technologies that they can convert that coal to synthetic gas, which can be used for making chemicals and reduce India's dependence on imported oil,” Ghasemi said.
The CEOs of major companies present in the meeting included those from Air Products, Baker Hughes, BP PLC, Cheniere Energy, Dominion Energy, Emerson Electric Company, Exxonmobil, Perot Group and Hillwood, IHS Markit, Lyondellbasell Industries, Mcdermott, Schlumberger, Tellurian Inc., Total S.A., Vinmar International and Westlake Chemicals.
Indian officials said the meeting was fruitful and one of the main objectives of the meeting was to listen from the CEOs and get their perspective on various aspects of India's energy sector ranging from environment to technology, investment and energy independence.
“It was an amazing opportunity for the energy and chemicals based industries here in Houston where the leaders of energy industry were given Indian prospective of energy requirements,” Rajesh Desai, senior vice president Fluor told PTI after the meeting.
“Innovative technology was given a high priority. It was great to understand that high priority was given to reduction of carbon footprint and that India would welcome energy industries with open arms that can help with PM's Make in India concept,” Desai said.
Mike Train, president of Emerson told PTI, “We had a number of recommendations, you know, again, ease of doing business, We've done a lot of work with invest India, which has been very helpful and our new factory project we're working on right now. Just to continue to drive those types of changes for and again, make India competitive." Vijay Goradia from Vinmar told PTI, that goals and expectations for India's energy security and reduction of carbon
emissions and overall reduction in pollution are not mutually exclusive.

It is impossible to come to Houston and not talk energy!

Had a wonderful interaction with leading energy sector CEOs. We discussed methods to harness opportunities in the energy sector.

Also witnessed the signing of MoU between Tellurian and Petronet LNG. pic.twitter.com/COEGYupCEt

"Prime Minister articulated this very clearly. We came away convinced that the environment is very conducive to grow US-India partnership in energy," he said.
“We also hope that relations between India and the US continue to blossom on political and economical fronts,” he said in response to a question.
The prime minister is scheduled to address over 50,000 Indian-Americans at the "Howdy, Modi" event on Sunday, in which he will be joined by US President Donald Trump. —PTI
SHARE ARTICLE