CHANDIGARH:Rooftop solar is fast catching fancy of micro and small units, offices, schools, hospitals and households as a reliable source of power in Punjab and Haryana. 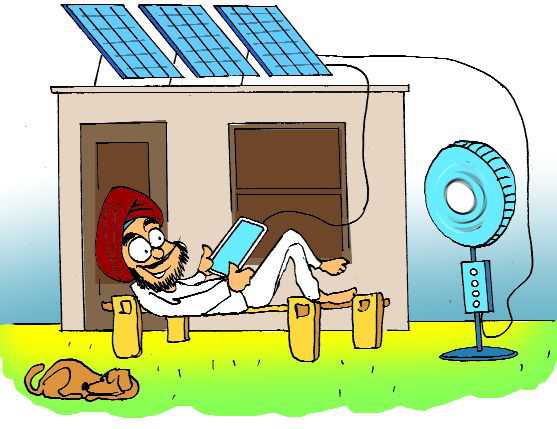 Rooftop solar is fast catching fancy of micro and small units, offices, schools, hospitals and households as a reliable source of power in Punjab and Haryana. According to solar power developers, in the past nine months, there has been a significant increase in queries related to rooftop solar projects. The total installed capacity of rooftop solar power in these two states has touched 245 MW.

Rooftop solar is mainly installed for captive consumption. Depending upon the requirement, the installation starts from 1kWp and can go up to 1 mega watt. Generally, most of the installed capacity is between 1 kWp and 20 kWp. Compared to the ground-mounted projects, the rooftop solar installations are much smaller in terms of generation capacity.

Currently, in Haryana, the solar power is dominated by rooftop plants of 145 MW (on residential and commercial buildings). The total installed capacity of solar power in the state is 225 MW, including ground-mounted installations. However, in neighbouring Punjab, the rooftop capacity is 100 MW.

“The market is expanding in these two states. In the past six to seven months, we have received queries from small cities such as Moga for rooftop installations. To further penetrate into the market, we have appointed partners in tier-III cities also,” Freyr Energy managing director Saurabh Marda said.

According to the developers, the main factor for stronger adoption of solar power is the cost which has fallen sharply over the past couple of years. Depending upon the size of the plant, the cost per unit comes out between Rs 2.77 and Rs 4 per unit.

Hartek Solar director & CEO Simarpreet Singh said the changing consumer behaviour towards cleaner source of energy was propelling the demand for solar plants in these two states. “Firstly, the rate of solar power generation has come down. Secondly, solar rooftop plants are reliable besides offering an economical and cleaner alternative to conventional energy. This also relieves the user from load-shedding by grid-based energy sources,” he said.

They said the government’s decision to increase subsidy from 30% to 40% on rooftop solar plants (up to 3 kWp capacity) will further give fillip to new installations. The subsidy amount has been fixed at 20% for 4 kWp to 10 kWp solar plants.