CHANDIGARH: Three persons, including two Nigerian drug peddlers, have been arrested with 127 gm of heroin worth around Rs 6 lakh. 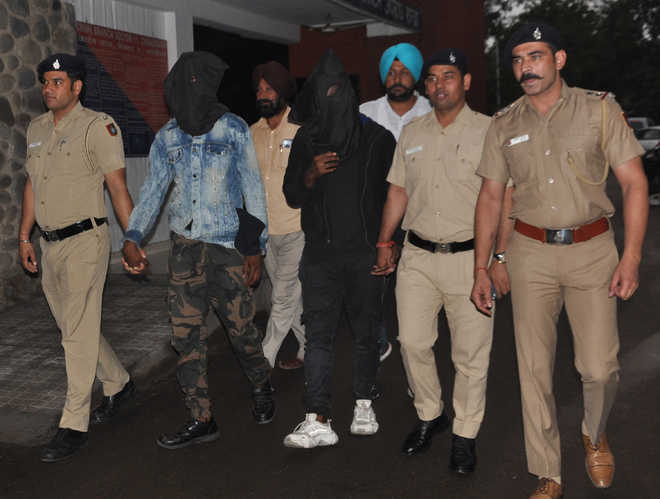 The Nigerians in the custody of the UT police on Friday. Tribune photo: Vicky

Three persons, including two Nigerian drug peddlers, have been arrested with 127 gm of heroin worth around Rs 6 lakh. The two Nigerians were arrested by the UTpolice from different parts of the city.

SP (Crime) Manoj Kumar said an African national, Chukwnebuku, who was residing in Dwarka, New Delhi, was arrested from near the fire station in Sector 17 with 55.82 gm of heroin.

Another African national, Joseph Kames, who was also residing in Dwarka, was arrested from the rear side of the ISBT, Sector 43, with 50 gm of heroin.

Joseph was earlier arrested by the Himachal Police in Una under the NDPS Act and he was out on bail.

Cases under the NDPS Act have been registered against both suspects.

The police have got two-day remand of Chukwnebuku and one-day remand of Joseph to expose their drug racket in the city. Another person, Munish Kumar, a resident of Khuda Lahora, was arrested from the Sector 39/40/55/56 chowk with 20.45 gm of heroin. A case has been registered against him at the Sector 39 police station. — TNS