A day in wilderness, an aftertaste for life

Chandigarh, with its epithet of the City Beautiful, is always projected as an urbane space of well-built civic infrastructure. 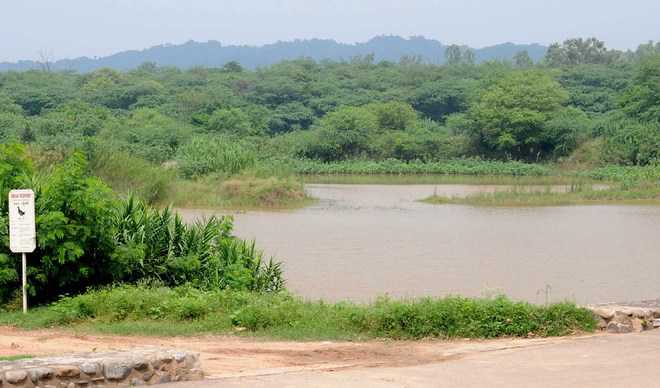 Chandigarh, with its epithet of the City Beautiful, is always projected as an urbane space of well-built civic infrastructure. The fact that there are dense forests in its fold and it can boast of a wonderful wildlife sanctuary - The Sukhna Wildlife Sanctuary - eludes us most of the time.

The Wildlife and Forest Department of Chandigarh has thrown open its gates for all nature lovers who care to trek through a rigorous path of seven kilometres amidst the jungle and we were the first-time enthusiastic participants. On the assigned date by 6 am we assembled at the venue. Each trekker was presented with a kit containing a T-shirt, a cap, a water bottle and a small packet of candies, by the department. People were grouped into smaller batches, each having one forest guide.

As the golden sun shone softly, we started the ascent to the first ridge. At each turn a new sight awaited us and we felt a surge of adrenaline in our veins. Youth and children were the most excited, trying to spot wildlife and pointing out to the marvel of nature to each other. The only time they stopped was to click photographs.

Reaching the ridge, faraway cities of Chandigarh and Panchkula could be seen as faded paintings in the horizon. Here stood the watch tower at the top of the hill and gave a panoramic 360 degree view of the Shivaliks. With its lush green cover dotted with glinting water bodies, it was a breathtaking splendour. Midway, near a clearing, there was an ancient well called, Khui Rodianwali.

We were provided with juice tetra-packs and we had a light snack of home-made sandwiches to rejuvenate ourselves. After resting awhile, we again started off. The best part of the trek was yet to come. Amidst the mountains was a vast water body around which the long Sarkanda grass was growing in abundance. Its white inflorescence waving with the mild breeze reminded us of Wordsworth’s ‘Daffodils’. Reflecting the blue of the sky, the water was home to many an aquatic flora and fauna and around it we could spot some footprints of neelgai or sambhar in the mud.

At different sites on the way the department had installed informative boards giving facts about different flora and fauna found in the sanctuary. We found that the forest was a habitat of golden jackal, wild boar, red jungle fowl, Indian porcupine, Indian grey hornbill and Indian pangolin to name a few. The forest had an abundance of trees — chhal, jingan, semul, phlai, kikar, chhlanda, hins, kaunda and dhak. The scientific names of the trees were also given on the boards, along with basic information.

As we skirted the lake and again ascended, we could see the Kansal log hut at a distance, which was our final destination. The trek was covered in about 3 hours. It was a wonderful and appreciable outreach by the Forest Department. We felt extremely energised and happy. Somehow, the physical exhaustion had not registered at all and what was left was an aftertaste of a great communion akin to a spiritual experience.