Bandh passes off peacefully in Patiala

PATIALA:Markets in the city wore a desserted look as members of the Ravidasia community protested at bus stand against demolition of Guru Ravidass temple in Delhi. 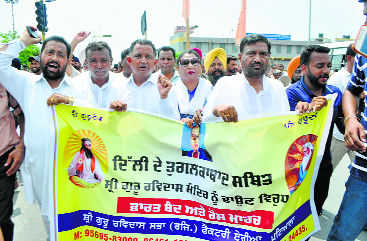 Members of the Ravidasia community hold a protest

Markets in the city wore a desserted look as members of the Ravidasia community protested at bus stand against demolition of Guru Ravidass temple in Delhi. The protest remained peaceful and no untoward incident was reported.

The protesters halted traffic and locked down the bus stand. The cops were deloyed in various parts of the city as a precautionary measure.While the government offices functioned, a number of schools remained closed.

Paramjit Singh Kainth of the National Scheduled Castes Alliance said, “Guru Ravidas’ hymns were included in the Sikh scripture. He taught removal of social divisions and promoted unity. Demolition of the temple has affected social fabric of the nation.”

He said the Lieutenant Governor of Delhi, who was also chairman of the DDA, should be directed by the Central Government to take proactive steps.

“If our demands are not met, we will head to Jantar Mantar in New Delhi on August 21.”

The agitators held a protest outside Punjabi University and blocked the front and back gate of the varsity.

Dr Jatinder Singh Mattu, president, Dr Ambedkar Karamchari Mahasang, said the Central Government should return the land of the holy shrine. “We will strengthen our protest if they do not accept