CHANDIGARH:If all goes well, the state-run Chandigarh Football Academy (CFA) will soon get the accreditation from the Ministry of Youth Affairs and Sports under the Khelo India scheme. 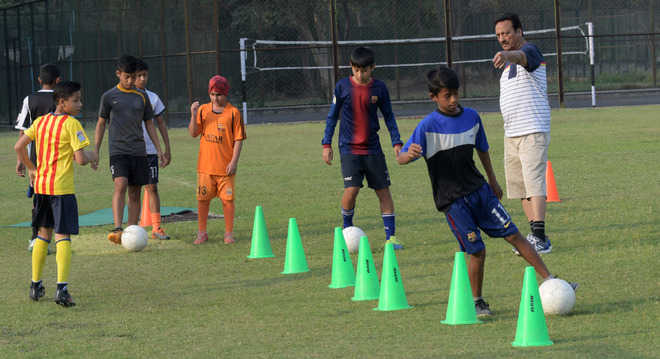 The Chandigarh Football Academy has produced over 40 international players in various age-groups.

If all goes well, the state-run Chandigarh Football Academy (CFA) will soon get the accreditation from the Ministry of Youth Affairs and Sports under the Khelo India scheme.

Under the scheme, the Ministry, through the Sports Authority of India (SAI), develops infrastructure and provides assistance to the accredited centres for nurturing talent. A Memorandum of Understanding (MoU) is signed which enables the beneficiary to select players from across the country and nurture them with the assistance of Government of India.

The process to get the Khelo India accreditation for the Chandigarh Hockey Academy (CHA) has already been completed and the Sports Department is now seeking the accreditation for CFA on the same lines, said Sports Director Tejdeep Singh Saini.

“We have got the accreditation for the CHA boys. An MoU has also been signed and we have roped in former India international Deepak Thakur to coach them. The selected players from across India will be professionally groomed at the CHA,” said Saini.

“We are in the process of getting accreditation for the CFA. It will help us develop the CFA as one of the best coaching centres for the footballers of the region,” he added.

The CFA has already produced over 40 international players in different age-groups under the guidance of former India international Harjinder Singh, who believes the move will help the centre grow further.

“It will directly help the city as we can get a good bunch of players at senior level. At present, the city is doing well in the lower age-groups, but we still lag behind at the senior level. This initiative will help the seniors to streamline their performance,” said Harjinder.

The Punjab Governor and UT Administrator, VP Singh Badnore, on Wednesday convened a meeting of the UT Sports Department officials and other senior officials of the UT Administration to take stock of various projects related to the development of sports in the city. Besides being apprised about the Khelo India accreditation for the state-run academies, the Governor was informed about the proposal to develop water sports at the Lake Sports Complex and construction of a world-class shooting range at Sarangpur. He directed the officials concerned to conduct a shooting camp as well as a shooting competition at the Sector 25 shooting range in November. Badnore was also apprised about the process of sports gradation and sports scholarships. He was informed that a total of Rs 78, 88,600 was disbursed for the year 2017-18 and the cash awards for the year 2018-19 will be disbursed as early as possible. He was also apprised of the summer coaching camps, the high-altitude coaching camps and the prize money championships to be held between August and October.