CHANDIGARH:Chandigarh XI conceded a late goal against Air India to settle for a 4-4 draw in their third match of the 29th Lal Bahadur Shastri Hockey Tournament after the side had made a massive comeback to take the lead at the Sector 42 Sports Complex here on Wednesday. 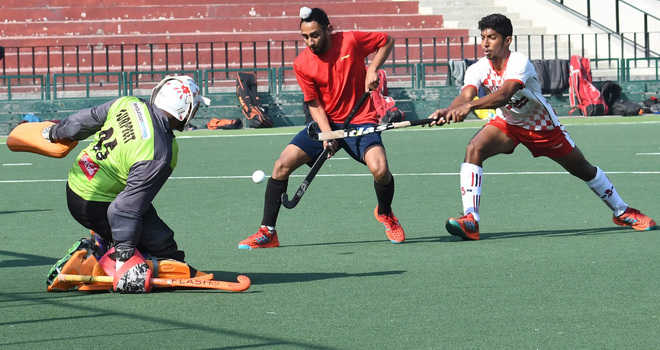 A player tries to score during a match on the third day of the 29th Lal Bahadur Shastri Tournament at the Sector 42 Sports Complex in Chandigarh on Wednesday. Manoj Mahajan

Chandigarh XI conceded a late goal against Air India to settle for a 4-4 draw in their third match of the 29th Lal Bahadur Shastri Hockey Tournament after the side had made a massive comeback to take the lead at the Sector 42 Sports Complex here on Wednesday.

Having won both their matches in the championship so far, Chandigarh XI looked a bit complacent at the start of the play today and an alert Air India team utilised the opportunity to the fullest.

Air India took the lead through Raheel Mohammad as early as in the third minute, and eight minutes later, Uttam Singh doubled their tally with another field goal.

Maninder Singh reduced the deficit for the hosts in the 15th minute, but a 23rd minute strike by Faraz Mohammad opened up a two goal lead for Air India.

Chandigarh XI, however, did not buckle under the pressure and scored twice in two minutes to restore the parity before the half-time.

While Parminder Singh struck in the 34th minute, Maninder completed his brace a minute later to help his team go into the break at 3-3.

Yograj Singh then scored from a penalty corner in the 44th minute to put the hosts in lead for the first time in the match. The side held onto the advantage until the 58th minute when Faraz Mohammad converted from the spot to level the scores.

Both teams tried to break the deadlock in the remaining minutes of the match but neither of them were successful and the score remained level at 4-4 at the final hooter.

Maninder Singh of Chandigarh XI was awarded Man of the Match for his brace.

In the second match of the day, Punjab Police overcame a one goal deficit to pip EME 3-2.

Salmon Herenj put EME ahead in the 12th minute but strikes from Prabhjot Singh (25th), Hashpreet Singh (30th) and Hardeep Singh (52nd) helped Punjab Police register a 3-2 win in their second match of the tournament. Salmon also scored the second goal for EME in the 43rd minute. Hashpreet Singh of Punjab Police was awarded Man of the Match.