CHANDIGARH:Rugby will make its presence felt in the city during the 6th Senior National Rugby Sevens Championship at Panjab University grounds from June 22 to 24. 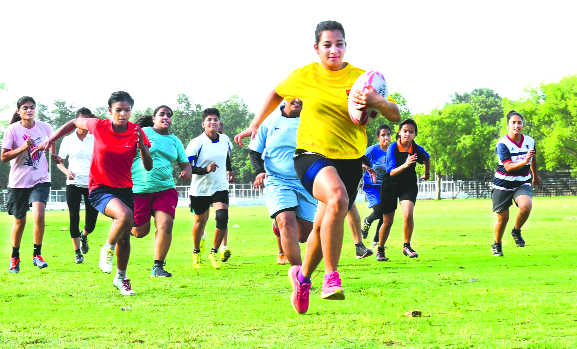 Local teams practise at the grounds of Panjab University on Sunday. The championship will start in Chandigarh on June 22.Photo: Pradeep Tewari

Rugby will make its presence felt in the city during the 6th Senior National Rugby Sevens Championship at Panjab University grounds from June 22 to 24.

A total of 24 players, 12 each in the men's and women's category, will be representing the city in the upcoming Nationals. The championship will be conducted by Chandigarh Rugby Football Association, under the aegis of Indian Rugby Football Union, at grass grounds of the university.

Former India player Surinder Jena (2007-14) of Odisha is coaching the local teams since June 9. "Besides teaching them the basics of the sport, I am making them familiar with the rules of the game," said Jena, who is also a rugby development officer with the Indian Rugby Football Union.

"The boys have shown a great improvement in perfecting their stance, catching, running with the ball and making on-field strategy. The female players are still learning," he added.

Jena claimed that the teams are practising for nine hours a day and are expected to give a good fight to their opponents. "Each player has lost at least 4 to 5kg weight, which is a good sign," said Jena. The tournament is expected to give a boost to the sport in the tri-city.

Poonam, who is an inter-varsity kho-kho player, is making her debut as a rugby player in the championship. Not only Poonam, there are many players from other disciplines who are trying their hand at the new sport. "It's a new sport all together. The tough part is to run with the ball and overcome the hurdles. We are working hard but it will take at least a year to be good at it," said Poonam, a student of Guru Gobind Singh College, Sector 26.

Ankita, a handball player, said rugby needs a lot of endurance and team work. "It's not a one-man show, like handball. You just cannot smash the ball in the net and score a goal. Here, you have to move forward with the help of fellow players," said Ankita, a student of MCM DAV College, Sector 36.

Balpreet, a national-level rugby player from Chandigarh, said rugby players are at a great risk of injury and it is a rough sport. This is the most injury prone sport and being new it will be difficult for us to cope up with the situation. We have a good team and the boys are confident to take some good experience from here," said Balpreet.

After hosting the championship, the Indian Rugby Football Union will organise a three-day selection trials to select the women's team for the Asian Games in Jakarta. The trials will be held from June 25 to 27.  As many as 24 states will participate in the men's category, while 21 teams will vie for the top honours in the women's category. The championship will be played on a turf and the equipment is being brought from Maharashtra.

The sport needs to be introduced at the school-level to get good results at the senior level. According to the local organisers many international players will participate in the championship.

Rugby Sevens is played on a standard rugby union playing field which is up to 100m long and 70m wide. On each goal line are H-shaped goal posts. A team consists of seven players (instead of 15) with five substitutes and five interchanges. There are two seven- minute halves with a maximum of two minutes break in between. If the match ends in a draw after the regulation time, it will go into sudden-death, in multiples of five-minute periods. All conversion attempts are drop-kicked (instead of having the option to place-kick).