Deepak bows out in a close contest

MOHALI:Chandigarh lad Deepak bowed to Daksh Chauhan of Chhattisgarh in a closely contested opening round match in the men’s 46kg category on the first day of the second edition of the National Junior Men and Women Boxing Championship at Chandigarh University campus, Gharuan, on Wednesday. 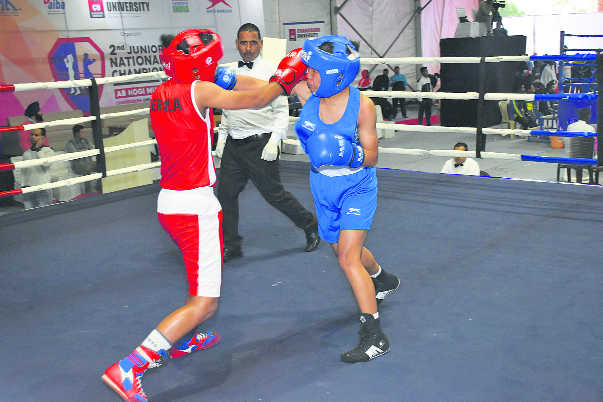 Chandigarh lad Deepak bowed to Daksh Chauhan of Chhattisgarh in a closely contested opening round match in the men’s 46kg category on the first day of the second edition of the National Junior Men and Women Boxing Championship at Chandigarh University campus, Gharuan, on Wednesday.

Deepak lost 3-2 to make an early exit from the championship.

Anshul Saroha of Haryana got a walkover against Jharkhand’s Nikhil Bhuiya in the opening round.

Meanwhile, Maharashtra’s Yogita overpowered Odisha’s Purnima 5-0 in the women’s opening round of the women’s 46kg class.

Seven hundred boxers from 30 states and union territories are participating in the seven-day championship.

The first day of the event witnessed 58 matches in the men’s category and 27 bouts in the women’s category, including the one between Haryana’s Neha, who won a gold medal in the 13th Selesian Cup, and Manipur’s H Ambeshori Devi, who was a part of the second National Cup. The duo competed in the 57kg weight category.

In the men 50Kg category, S Victor Singh, who won a gold medal in the National Cup in Serbia, competed against Bihar’s Abhishek Kumar.

Earlier, the day began with a 46kg bout being abandoned in the second round when S Kalarasan of Tamil Nadu forced Rajasthan’s Harsh Chandra Meena’s coach to throw in the towel after his ward received a solid pounding. Kalarasan was severe from the start and sent down combination punches on his Rajasthan opponent who managed to withstand the first round.

However, the second round proved to be his undoing and his coach judged the gravity of the situation to pull him out of contest before any major damage was caused. — TNS/Agencies