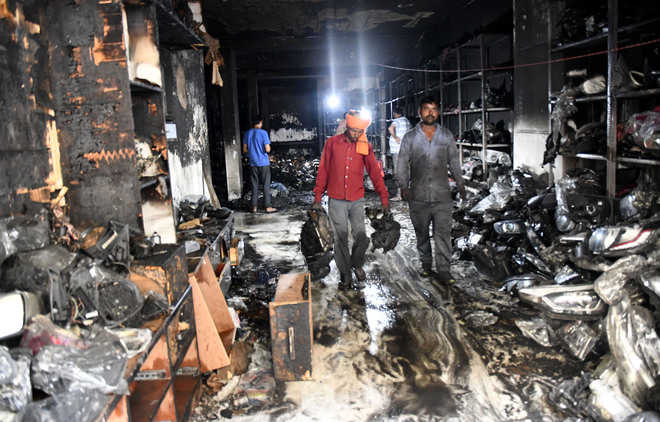 A major fire broke out at a shop dealing in motor vehicle accessories at Burail village here late on Friday night.

The fire department got the information at 11.30 pm that a fire has broken out at Garg Motor Shop, following which five to six fire tenders were pressed into service.

A team of the fire department reached the spot in no time and doused the flames by 2.30 pm. A short circuit was reported during the operation, which hindered firefighting.

Sources said it was an old shop. The police had a tough time managing the local residents who had gathered to witness the firefighting operation.

“We were going to sleep when we heard noise outside. We came out and saw the shop on fire. Soon, teams of the fire department reached here to control the situation. No one was inside the shop when the mishap was reported,” said a man, who lives in the neighbourhood.

Fire officials said the reason of the fire could not be ascertained but it was suspected to have taken place due to a short circuit.  “We had to send small vehicles for firefighting operation as Burail is a thickly populated area,” said a fire official. Sources said a fireman suffered minor burn injuries during the operation.

Sanjay Garg, the shop owner, said, “The loss is yet to be calculated.”  — TNS