CHANDIGARH:More than 15 fish were found dead at Sukhna Lake on Sunday. 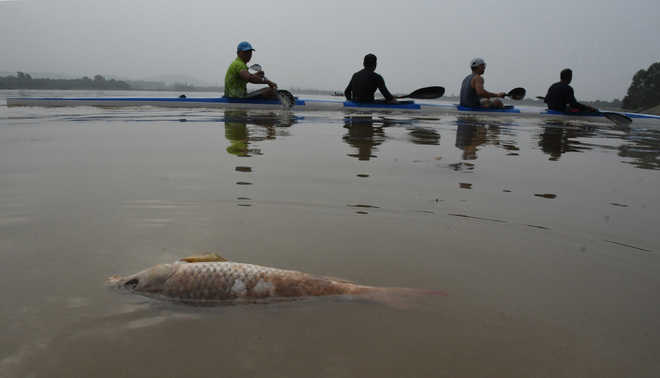 More than 15 fish were found dead at Sukhna Lake on Sunday. While officials  of the Animal  Husbandry Department primarily blamed lack of  oxygen in the  water for the death of the fish, experts said there could be other  reasons too.

The Sukhna water has turned muddy  these days resulting  in a loss of oxygen. Dr Ravneet Kaur, Assistant Professor, Department  of Zoology, PU, said in this season of high humidity, there was less exchange of oxygen  between the water and the external   environment. She said it happened every  year  these  days. Regular visitors to the lake said for the past  one week,  they had  been noticing some  dead fish in the water.

Mukesh Bassi,  a regular  visitor to the  lake, said the  smell  of dead fish made it difficult  to walk  along the  lake.

Dr  Ravneet Kaur said some  fish might not have been able to tolerate the deficiency of oxygen in the lake water and died.

She said, “This usually happens during the monsoon when there are clouds all over  and less  sunlight. This leads to a decline in the oxygen level. The fish could not get enough oxygen and died.”

Dr Kanwaljeet   Singh, Director, Department of Animal Husbandry  and Fisheries,  said  they were closely watching the  development. He said they had noticed that the water  flow from upper  areas also brought a lot of silt, resulting  in less oxygen. Some  of the  dead fish came from the upper areas.

Experts  said despite the High Court’s  order, sewage from nearby areas was still flowing into the  lake, which also  needed to be monitored.