MOHALI: Land acquisition is causing a delay in the construction of the Mohali-Kharar flyover project. 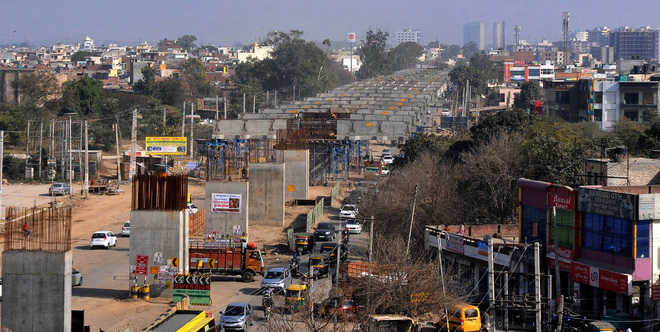 Land acquisition is causing a delay in the construction of the Mohali-Kharar flyover project. The target for the completion of the project is March 31, 2019.

National Highways Authority of India (NHAI) officials said they had written to the authorities concerned, including the Sub-Divisional Magistrate (SDM) and tehsildars, seeking their help in the acquisition of land and were hoping to expedite the process of document verification and compensation in the case of shops on the stretch.

An NHAI official said on the condition of anonymity, “So far, 102 pillars have been completed of the 139 and 15 to 20 per cent girder-erection work has been initiated. On the stretch of the road that has been

“From Daon to Balongi, some shops (built-up area) have been demolished and work on the service road has begun,” the official said.

Another official said in the rehabilitation process, the document verification process was going on, but people were yet to claim compensation. “The payment for 244 structures has been deposited. However, the payment has been distributed only for 75 properties. Certain shop owners do not have registries and are living abroad,” the official said. The official said the work had to be stopped at a stretch near the Ravi market due to some disputed properties over 250-metre area.

The construction of the six-lane flyover began on June 9 in 2016 and has since been redesigned as a combination of elevated and surface project after earlier designs were shelved by the NHAI following protests from some area residents. The project includes a 10.185-km stretch, including a 3.2-km elevated corridor and three vehicular underpasses.

Meanwhile, traffic congestion on the road, in the absence of diversion and proper service roads, leads to serpentine traffic queues, causing inconvenience to commuters.

“The pace of the construction work gets hampered due to heavy traffic movement during the day. The carriageway for vehicular traffic is narrow,” said a member of surveying team working on the project.

The official said, “If the work is not expedited, the project will only be handed over by the end of 2019.” The flyover will reduce the travel time by a couple of hours for an estimated 40,000 vehicles plying on the route daily.