CHANDIGARH: The Municipal Corporation, Chandigarh, has appointed satirist and artiste Savita Bhatti the brand ambassador for the Swachh Bharat campaign. 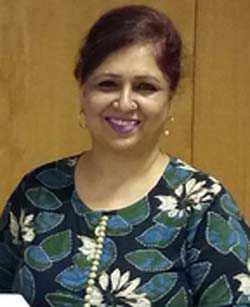 Chandigarh: The Municipal Corporation, Chandigarh, has appointed satirist and artiste Savita Bhatti the brand ambassador for the Swachh Bharat campaign. Bhatti, wife of the late satirist Jaspal Singh Bhatti, said she would chalk out a plan to reach out to the people in the city for creating awareness regarding the Swachh Bharat Mission. She said her focus would be on segregation of waste at source and she would plan “nukkar nataks” and other activities for creating awareness. The MC has planned to organise community activities, including street plays, hand wash fairs and local/ward-level cleanliness drives. Internal campaigns such as the “Clean Employee of the Month” and “Best Driver” would also be organised. TNS

Chandigarh: The police have booked two persons, including a woman, for allegedly submitting fake documents for approval of a car loan of Rs 10 lakh from the State Bank of Patiala. The police said MS Lamba, AGM, SBoP, Sector 8, here, alleged that Sarit Kumar Murgai of Zirakpur, along with a woman, submitted forged documents for the approval of the car loan. A case has been registered. TNS

Chandigarh: Manoj Kumar, a resident of Dera Sahib, Mani Majra, reported that unknown person had stolen a battery, a tyre and woofer from his car and woofer and an amplifier from another car parked at the MHC, Mani Majra, on the night intervening September 2 and 3. A case has been registered. TNS

Chandigarh: The police have arrested three persons, including two women, for attacking a man and his son in Mauli Jagran. Hari Ram of Vikas Nagar, Mauli Jagran, said Ram Dhar Tiwari and two women attacked him and his son Ashish at their residence on September 3. The complainant suffered injuries and was admitted to the Civil Hospital, Mani Majra. He was later referred to the GMSH-16. TNS

Chandigarh: Vishal, a resident of Milk Colony, Maloya, here, alleged that three unknown persons attacked the complainant with sharp weapons near Guru Kripa Darbar, Sector 56. The victim suffered injuries and was admitted to the PGI. A case has been registered. TNS

Mohali: The Mohali police arrested a person for kidnapping a minor girl. The accused has been identified as Naresh Puri, a resident of Gobindgarh village, who works as a mason. A case has been registered at the Sohana police station. According to the police, Naresh had eloped with the victim, a Class X student in the last week of June. “First, they went to Bihar and then they returned and started living near Nangal,” said the police. The police arrested Naresh when he, along with the victim, returned to meet their kin. The accused was produced before a local court, which has sent him to two-day police remand. TNS

Chandigarh: A 50-year-old man from Ambala, identified as Amritpal Singh, died of swine flu at the PGI here on Monday. Sources said Amritpal was rushed to the PGI a week ago and was found suffering from swine flu. On Sunday, his condition deteriorated. TNS

Girl hangs herself to death

Chandigarh: A 23-year-old girl reportedly committed suicide by hanging herself at her house in Sector 29 on Sunday evening. The police said the victim had written a suicide note on her hand stating that she was taking the extreme step on her own and no one should be held responsible for it. Sources said the victim had been identified as Neha, who was pursuing a course at the ITI in Panchkula. The victim was found hanging by her family members. She was rushed to the hospital where doctors declared her brought dead. TNS

Fatehgarh Sahib: The district police have arrested seven persons, including four youths, with 28 gm of heroin, 10 kg of poppy husk and 130 bottles of liquor. They all have been booked under the NDPS Act. Alka Meena, SSP, said the Amloh police had erected a naka at the T-Point, Raipur Chobdaran, and during the search of vehicles, they signalled a car to stop but its four occupants tried to flee. After some chase, the police overpowered them. She said 28 gm of heroin was recovered from them. They have been identified as as Akshey Sharma, a resident of Malerkotla, Sandeep Singh, a resident of Patiala, Avtar Singh and Kulwinder Singh, both residents of Amloh. They used to sell heroin to youths in colleges.  The SSP said the Sirhind police intercepted two motorcyclists and recovered 10 kg of poppy husk. They were identified as Faqir Chand and Sonu, both residents of Tarkhan Majra. The Khamano police raided a building and recovered 130 bottles of liquor. The accused has been identified as Bant Singh, a resident of Khamano. OC

One arrested with liquor

Lalru: The Lalru police on Sunday arrested a resident of Dharamgarh village here with 22 bottles of Illicit liquor. The accused has been identified as Narinder Singh. A police party was patrolling on the Rurki-Dhire Majra road when they stopped the accused for checking and recovered 22 bottles of Indian-made liquor. OC