On bail, murder accused fires at witness in Kumbra, escapes

MOHALI: A murder accused out on bail shot at a witness in the case thrice at the latter’s house in Kumbra village here today. The victim, Veer Singh, (55), was rushed to a private hospital where his condition is stated to be out of danger. 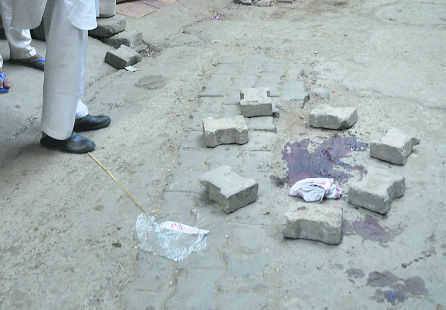 The spot where Veer Singh was shot at in Kumbra village, Mohali, on Friday. Tribune photo: Vicky

A murder accused out on bail shot at a witness in the case thrice at the latter’s house in Kumbra village here today.

The victim, Veer Singh, (55), was rushed to a private hospital where his condition is stated to be out of danger.

Veer Singh was witness to a murder allegedly committed by Manish in October 2015.

The police said the incident took place around 6 am today when Manish and Rajwinder went to Veer Singh’s house. They spoke to him for a few minutes and also had tea at his place. Later, Manish pushed away Veer Singh, pulled out a pistol and fired three shots at him before fleeing.

The victim received bullet injuries in his thigh, shoulder and stomach. His son Kamalpreet Singh rushed him to Fortis Hospital in Phase VIII.

In his complaint to the police, Kamalpreet stated that his father was being threatened as well as lured by Manish and his accomplices to change testimony. Veer Singh, however, told them that his conscious did not allow him to do so, he added. Veer Singh had appeared as a witness in court, following which Manish had been languishing in jail since 2015.

Manish, a US citizen, was released on bail three months ago. A case under Sections 307 and 452 of the IPC and Section 25 and 27 of the Arms Act has been registered against Manish Parbhakar and Rajwinder Singh. DSP Ramandeep said a manhunt had been launched to nab the suspects.