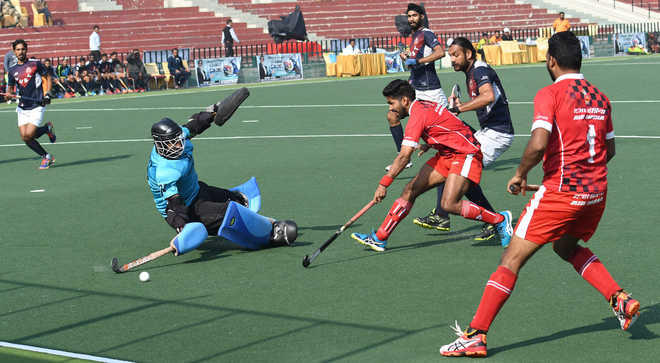 A late goal by Gagandeep Jr helped Punjab National Bank (PNB) eke out a 2-1 win against Punjab Police on the fourth day of the 29th Lal Bahadur Shastri Hockey Tournament at the Sector 42 Sports Complex here on Thursday.

Gagandeep struck the winner in the 68th minute after Balwinder Singh had brought Punjab Police back into the match with a second-half goal.

Earlier, both teams started off on a slow pace and looked to play for possession until the bankers broke free through Gurjinder Singh in the 18th minute.

With their tails up, PNB started to make regular forays into the Punjab Police territory but custodian Jassbeer Singh was alert to the situation.

Had it not been for Jasbeer’s individual brilliance, Punjab Police might have conceded a few more goals in the opening half.

After the break, Punjab Police came out charging in search of the equaliser and their efforts finally met success when Balwinder sounded the wooden plank in the 56th minute.

Just as the match seemed to be heading for a draw, Gagandeep Jr successfully converted a penalty corner to steer the bankers to victory.

Earlier, in the first match of the day, Raheel Mohammad scored a brace to guide Air India to a 4-2 win over BSF.

Air India took the lead through Faraz Mohammad in the 32nd minute, but Daljit Singh (38th) and Hatinder Singh (42nd) struck within a space of five minutes after the break to put BSF in the driver’s seat.

The side, though, could not hold on to the lead for long and conceded three goals in the remaining time to lose the match 2-4.

While Rajkumar Pal scored the equaliser for Air India in the 50th minute, Raheel struck in the 63rd and 68th minutes to ensure an easy win for side.

Raheel was also adjudged Man of the Match.

Tomorrow, BSF will lock horns with CISF, while CRPF will take on EME.